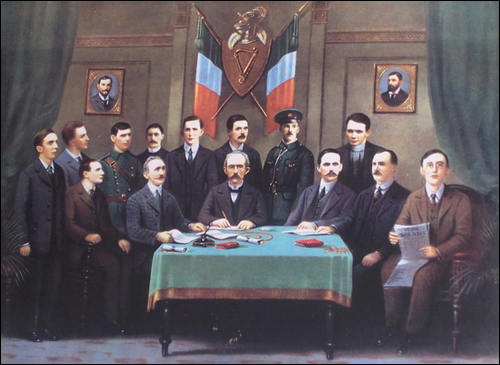 On Friday, April 24th 2015 we will mark the 99th Anniversary of the Easter Rising and the declaration of the Irish Republic. There has already been considerable commentary, which shall only intensify over the course of the coming year, as to the significance of the proclamation and the motives of the signers and key participants. There is a great deal of material for those who wish to “spin” the events to their agendas to work with when looking back at 1916 with 20-20 hindsight.

Some political theorist have already offered a highly censored view of events to state the Rising was unnecessary as Britain had already promised “Home Rule”; ignoring the fact that the “Home Rule” was more title than substance. Under so called Irish “Home Rule” Britain would still have a veto over anything an Irish Parliament passed, Ireland would still have no control over the Army or police nor the right to make treaties. In fact the Irish voice in the British parliament, which had veto power over the proposed Irish

Home Rule parliament, would be diminished. Even this emaciated form of home rule was dead on arrival as the British government continued to bow to the hypocrisy of professed “loyalists” who threatened to rebel if the constitutionally passed Home Rule bill was implemented. Home Rule died on the fields of the British military camp at Curragh when British Army officers threatened mutiny  rather than enforce the constitutionally passed  Home Rule bill  as the law of the land in 1914, not on the streets of Dublin in 1916.

Other “experts” can engage in amateur psychology, making diagnoses from a century away without ever having spoken to the “patient”, on the desire of some leaders such as Pearse to be a “blood sacrifice” for Ireland. Certainly these were people of a different age than our often cynical and self-indulgent modern society, people of conviction, people who had a belief in a noble and higher purpose; in advancing the greater good of society even if that meant personal , even the ultimate, sacrifice. We see these sentiments in great leaders and great patriots in every nation and in general their noble motives are accepted at face value, why do we not extend the same courtesy to the Rebels of 1916?

If we really want to understand what motivated the Rising in 1916, we have to go no further than their own testimony as declared publicly at around 12:45PM in front of the General Post Office:

“We declare the right of the people of Ireland to the ownership of Ireland, and to the unfettered control of Irish destinies, to be sovereign and indefeasible. The long usurpation of that right by a foreign people and government has not extinguished the right, nor can it ever be extinguished except by the destruction of the Irish people. In every generation the Irish people have asserted their right to nationalfreedom and sovereignty; six times during the last three hundred years they have asserted it to arms. Standing on that fundamental right and again asserting it in arms in the face of the world, we hereby proclaim the Irish Republic as a Sovereign Independent State, and we pledge our lives and the lives of our comrades-in-arms to the cause of its freedom, of its welfare, and of its exaltation among the nations. ”

How similar is the line “we hereby proclaim the Irish Republic as a Sovereign Independent State, and we pledge our lives and the lives of our comrades-in-arms to the cause of its freedom, of its welfare, and of its exaltation among the nations ” to the conclusion of our own declaration of Independence from the same Great Britain “we mutually pledge to each other our Lives, our Fortunes, and our sacred Honor”; both eloquent statements of the natural human desire for freedom irrespective of the cost or the odds.