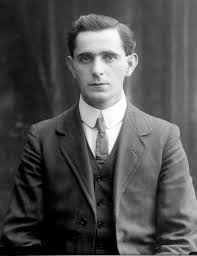 Sean Mac Diarmada was born in Corranmore, near Kiltyclogher in County Leitrim, the third youngest of ten children. He grew up in an area scarred by the sad history of Ireland’s experience under English rule. Surrounding his boyhood home there was an ancient sweathouse, Mass rocks from the penal law days when the Catholic faith was illegal and priests hunted like wolves and countless abandoned homesteads as the silent testament to when England allowed Ireland to starve. These atrocities were sadly not confined to the past; as a boy of fifteen Sean saw one hundred of his neighbors evicted by the local landlord.

Mac Diarmada, was remembered as “one of the schools best pupils, bright in every sense of the word, lively and fond of boyhood games, good natured and even tempered”, a “dark-haired comely boy with a smiling face and dark-blue eyes”. He was a voracious reader of Irish history. The commemoration of the 1798 Rebellion, protests against the Boer War and the cultural revival as spearheaded by the GAA, in which he was an active member, all shaped his political outlook.

Mac Diarmada, twice attempted the highly competitive national teacher’s examination, but failed due to a weakness in mathematics. With few prospects in rural Ireland he, like many before and since, was forced to leave his home, first immigrating to Glasgow, Scotland where he worked as a gardener and then to Belfast where he took employment first as a tram conductor and then as a barman. However, such employment was obviously oppressive to a man of Mac Diarmada’s talents and intelligence, which quickly found outlet in politics. Belfast at that time was a center of the movement for an independent Ireland and Mac Diarmada, soon became acquainted with two of the driving forces of this movement, Bulmer Hobson and Denis McCullogh. Hobson and McCullogh had established a series of Dungannon Clubs which promoted advanced national ideals and development of native Irish industry and a recruiting ground for the more militant Irish Republican Brotherhood. They quickly appreciated Mac Diarmada’s energy, intelligence and charisma and developed him into one of their most effective speakers. They hired him as an organizer for the clubs and swore him into the IRB. He would be a tireless recruiter for the cause of Irish nationalism and would continue in this role when the Dungannon Clubs were absorbed into another independent nationalist organization; Sinn Féin.

The turning point in Mac Diarmada’s life was when he met Tom Clarke in Dublin in 1908. As did Hobson and McCullagh before, the old unrepentant Fenian saw in Mac Diarmada the energy needed to revive the near comatose Republican movement. The two men became close friends to the point of a father and son relationship. Under Clarke’s guidance, Mac Diarmada joined numerous Irish Cultural organizations in search of other young men of talent and ability who had a deep commitment to their country. It was in the role of talent spotter that he identified the future leaders of the Rising: Padraig Pearse, Eamonn Ceannt and others. According to one observer it was Mac Diarmada’s “energy and organizing ability” that was a significant factor “in creating a group and guiding events to make the Rising Possible”. One of Mac Diarmada’s notable achievements was a hugely successful and well attended showcase of Irish manufactured goods to promote native Irish industry. He became the manager of the Irish Freedom newspaper and went out on the speaking platform to protest a visit by King George V.

Yet, the countless hours of devotion to Ireland’s cause, including numerous beatings from opponents to his public speaking in her defense, had taken their toll on Mac Diarmada’s health. In autumn 1911, Mac Diarmada, was stricken with polio, leaving his right leg permanently lame and requiring him to walk with a cane. While the disease had crippled his body, it dampened neither his energy nor enthusiasm. Mac Diarmada, was a key figure in the organizing of the Irish Volunteers using the contacts he had built up among the members of the various cultural societies. During the Howth gun-running, Clarke and Mac Diarmada spent the day in a taxi travelling to and from Howth to transfer the weapons to Dublin. It was Mac Diarmada, who convinced James Connolly to table an independent rising by the Irish Citizen Army and instead made Connolly part of the planning of the Easter Rebellion. Mac Diarmada, had initially convinced the head of the Irish Volunteers Eoin MacNeill of the possibility of a successful rising during Easter, only for MacNeill to lose his nerve when he heard of the capture of Roger Casement and the failure to land weapons from Germany in Kerry; issuing without consultation a countermanding order that put the success of the rising in jeopardy. Mac Diarmada, and the other members of the Rising’s military council realized that the point of no return for the rising had been passed and delayed the rising for 24 hours as they frantically tried to undo the damage MacNeill had caused.

On Easter Monday, April 24, 1916, Tom Clarke and Sean Mac Diarmada traveled by car, because of Clarke’s age and Mac Diarmada’s infirmity, and met the Rebels at the GPO to see the Irish Republic Proclaimed. While holding no military rank, Mac Diarmada, ever the consummate organizer, stepped up to provide increasing leadership when required due to the wounding of Connolly and Pearse boarding on exhaustion. On the last day of the Rebellion, realizing the increasing civilian death toll resulting from indiscriminate use of artillery by the British, Mac Diarmada, convinced the remaining volunteers, most of whom wished to continue to fight, to surrender. Mac Diarmada had no delusions what that surrender would mean for him personally. He reassured the volunteers that they would likely be only imprisoned for a “few years”; going on to say that the Volunteers “had fought a gallant fight… that their duty now was to survive….We, who will be shot, will die happy – knowing that there are still plenty of you around who will finish the job.”

Upon his surrender, in an act of senseless cruelty, a sneering British officer remarked to MacDiarmada “Do the Sinn Feiners take cripples in their army?” as he confiscated Mac Diarmada’s cane and forced him to march without it to his imprisonment, the exertion of which nearly killed him. As he predicted, Mac Diarmada, was tried by military court martial and executed in the Stonebreakers Yard of Kilmainham Gaol on 12 May 1916. His final words were:

“I, Sean Mac Diarmada, before paying the penalty of death for my love of Ireland, and abhorrence of her slavery, desire to make known to all my fellow-countrymen that I die, as I have lived, bearing no malice to any man, and in perfect peace with Almighty God. The principles for which I give my life are so sacred that I now walk to my death in the most calm and collected manner. I meet death for Ireland’s cause as I have worked for the same cause all my life….God save Ireland.”