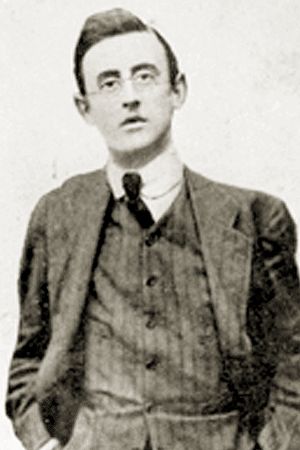 On April 24, 1916 amidst the chaos of the newly seized Dublin General Post Office (GPO), a fifteen year old Roddy Connolly, acting as an aide to his father James Connolly, noticed a peculiar site. He saw men putting down a mattress in front of the stamps counter and a man in a resplendent uniform complete with saber then lying upon it while everyone else was dashing about him. Rather contemptuously he asked his father who this man was who was lying down during a revolution? James Connolly responded to him sharply “That’s Joe Plunkett and he has more courage in his little finger than all the other leaders combined”.

Joseph Mary Plunkett was born on the 21st of November 1887 at 26 Upper Fitzwilliam Street in one of Dublin’s most affluent neighborhoods. He was the son of an old family where both parents themselves came from wealthy backgrounds. Joseph’s father had been made a Papal Count for endowing the Sisters of the Little Company of Mary, a nursing order, with money and property. The family was directly related to the martyred St. Oliver Plunkett.

Sadly, in proof of the old adage the Plunkett’s money could not buy health for their son. Joseph contracted tuberculosis at a young age and would be burdened with the disease his entire life. As a child he was frequently bedridden where he became a voracious reader; developing a wide ranging intellect from poetry to the latest technologies of the day such as radio. Plunkett attended Catholic University School, Belvedere College in Dublin and later Stonyhurst College, Lancashire, where he acquired some military knowledge from participation in the Officers’ Training Corps. He was an ardent student of language and was soon swept up in the Gaelic revival. He became a member of the Gaelic League and formed a lifelong friendship with another future signer of the 1916 Proclamation Thomas MacDonagh with whom he shared a love of poetry. Plunkett helped found an Irish National Theater, was the editor of the Irish Review and a selection of his poems were published under the title “The Circle and the Sword’

As with many of his generation, Plunkett’s appreciation of his nation’s history and culture led naturally to a desire to see it free and independent. Originally an advocate for constitutional Home Rule, he became disillusioned by Britain’s cynical failure to enact the Third Home Rule Bill. It became clear that England would never grant Ireland her independence by constitutional means; if Ireland was to become a free nation a rising of her people would be necessary. Plunkett joined the Irish Volunteers and was sworn into the Irish Republican Brotherhood (IRB).

Because of his military knowledge, Plunkett was appointed Director of Military Operations for the Rising. Using his all too real illness as a cover, he traveled to Germany where he was successful in securing a shipment of rifles. He traveled to America to brief the American branch if the IRB, Clan na Gael, on the preparation of the Rising. Modern revisionist have attempted to try and paint the Easter Rising as a hopeless and insane enterprise; this is a grave discredit to Plunkett’s and shows little understanding on their part Plunkett’s plan for the rising was highly sophisticated and showed a great deal of modern insight.. Plunkett chose the GPO as the center for the rising because it was the center of telegraphy in Ireland, and throughout the Rising under Plunkett’s direction volunteers would broadcasted the news of the Proclamation of the Republic to the outside world, specifically America. The goal of the Rising was not to beat the British in the field, but to hold on long enough to secure political recognition for an Irish Republic. In an early example of Special Operations, Plunkett assembled a team that knew electronics and the British Admiralty codes who were to seize a radio station and transmit false orders to clear the sea lanes of Ireland to allow the landing of the German arms shipment while sowing confusion in the British ranks that would cause them to hesitate sending reinforcements from Britain. This plan was a victim of the fortunes of war, which has scuttled the plans of many a general, when the German ship arrived early and was captured by the British Navy and Plunkett’s communication team met with a road accident on the way to their objective.

Despite continuing ill health, Plunkett dedicated all his energies to the rising. The Larkfield estate which had been inherited by Plunkett’s mother in the suburbs of Dublin quickly became a training ground and barracks for recruits to the Irish volunteers. It was here that Plunkett met a young Michael Collins. An unlikely pair, the burly and robust Collins and the frail, sickly Plunkett formed a deep friendship and Collins was made Plunket’s Aide de Camp. It was Plunkett who gave Collins the book “The Man Who Was Thursday” in which the main character observed “if you didmt seem to be hiding nobody hunted you out” that would inspire Collins future career and Plunkett in turn would come to lean on Collins, both literally and figuratively, throughout the rising.

Despite a recurrence of his tuberculosis, an operation only weeks before the Rising and a doctor’s prognosis that he had only weeks to live; Plunkett aided by Collins joined the company of the Irish Volunteers and marched to seize the Post Office on Easter Monday 1916. Despite the exertions of marching to the GPO exhausting him, giving rise to the scene young Roddy Connolly recalled vividly in later years, Plunkett was later seen throughout the week actively engaged in the rising through the force of his will. Plunkett’s plan to get word of the rising to America worked, but the loss of the German arms and the lack of a rising in the rest or Ireland allowed the British to concentrate their forces on Dublin and savagely crush the rising.

Plunkett was tried by a British court martial and sentenced to be executed. The evening before his execution he was permitted to marry his fiancee Grace Gifford in the prison chapel, two British soldiers with fixed bayonets acting as the witnesses. This poignant moment is captured in the popular Irish song “Grace”. As he stood awaiting the firing squad, Plunkett’s final words to the priest accompanying him were ‘Father I am very happy. I am dying for the gloiy of God and the honour of Ireland. The priest said later that “ his face reminded me of St Francis… no fine talk, no heroics [but rather] …a distinguished tranquillity that came from his nobility of soul“. Joseph Plunkett was 28 years old.