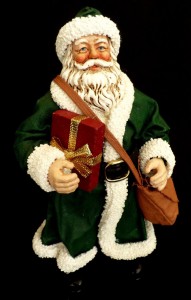 In a troubled world, thank God for the gift of hope called the Christmas season. For all of us, it is a time where we can take an opportunity to at least momentarily free ourselves of the chains of what seems the depressing realities of the world and once again engage in the saintly innocence of children where are eyes are opened to the magic of the universe and all things are possible. Perhaps the greatest testament to that faith was prompted by the innocent question of an 8 year old Irish American Virginia O’Hanlon.

Virginia O’Hanlon was born on Manhattan’s Upper West Side in 1889. Her Grandfather had been a founding member of the 63rd Volunteer Regiment of Meagher’s Irish Brigade and his bravery had been mentioned in dispatches. Her father, Dr. Phillip O’Hanlon, was a new York City Coroner and had been credited though his forensic work of providing the critical evidence that led to the identification and conviction in a prominent murder case. An intelligent and inquisitive child, Virginia later recalled that whenever there was a question of fact in the family, her father would always turn to the NY Sun Newspaper as the final arbiter; saying “If you see it in The Sun, it’s so.”
At the age of 8, young Virginia was apparently teased by some boorish bullies about her belief in Santa Clause. Following her families tradition, she put the question in the form of a letter to the NY Sun. The letter and response by the editor Francis P. Church has become an icon of journalism and a classic affirmation of the Christmas spirit.
Dear Editor—
I am 8 years old. Some of my little friends say there is no Santa Claus. Papa says, “If you see it in The Sun, it’s so.” Please tell me the truth, is there a Santa Claus?
Virginia O’Hanlon
Virginia, your little friends are wrong. They have been affected by the scepticism of a sceptical age. They do not believe except they see. They think that nothing can be which is not comprehensible by their little minds. All minds, Virginia, whether they be men’s or children’s, are little. In this great universe of ours, man is a mere insect, an ant, in his intellect as compared with the boundless world about him, as measured by the intelligence capable of grasping the whole of truth and knowledge.
Yes, Virginia, there is a Santa Claus. He exists as certainly as love and generosity and devotion exist, and you know that they abound and give to your life its highest beauty and joy. Alas! how dreary would be the world if there were no Santa Claus! It would be as dreary as if there were no Virginias. There would be no childlike faith then, no poetry, no romance to make tolerable this existence. We should have no enjoyment, except in sense and sight. The eternal light with which childhood fills the world would be extinguished.
Not believe in Santa Claus! You might as well not believe in fairies. You might get your papa to hire men to watch in all the chimneys on Christmas eve to catch Santa Claus, but even if you did not see Santa Claus coming down, what would that prove? Nobody sees Santa Claus, but that is no sign that there is no Santa Claus. The most real things in the world are those that neither children nor men can see. Did you ever see fairies dancing on the lawn? Of course not, but that’s no proof that they are not there. Nobody can conceive or imagine all the wonders there are unseen and unseeable in the world.
You tear apart the baby’s rattle and see what makes the noise inside, but there is a veil covering the unseen world which not the strongest man, nor even the united strength of all the strongest men that ever lived could tear apart. Only faith, poetry, love, romance, can push aside that curtain and view and picture the supernal beauty and glory beyond. Is it all real? Ah, Virginia, in all this world there is nothing else real and abiding.
No Santa Claus! Thank God! he lives and lives forever. A thousand years from now, Virginia, nay 10 times 10,000 years from now, he will continue to make glad the heart of childhood.

The story does not end there. Virginia received a Bachelor of Arts from Hunter College in 1910, a Master’s degree in education from Columbia University in 1912, and a doctorate from Fordham University in 1935; a considerable achievements at any time, but particularly impressive during an age when higher education was not as accessible for women . She became the principal in a New York City public school serving children with special needs where she served until her retirement as a respected and beloved educator in 1959. In interviews she would always credit her remarkable life of service to living up to the ideals of Santa Clause expressed in Francis P. Church’s response to her letter when she was 8 years old.

The story of “Yes, Virginia there is a Santa Clause” and Virginia O’Hanlon is a challenge to us all. Let us not deprive our children of the magic of Christmas and the lesson of Santa Clause, a man who gives of his gifts and talents without asking anything in return, for a sterile, bland politically correct “Happy Holidays” that stands for nothing, affirms nothing and does not challenge us to aspire to be more than we are. Anyone who does not believe in Santa has but to come to Hibernian House and see the money appear without explanation nor credit in the “Family in Need Jar”, or toys for needy children show up out of nowhere in the “Toys for Tot” box or the elves who work the Senior Citizen Luncheon or the Special Needs Christmas party. 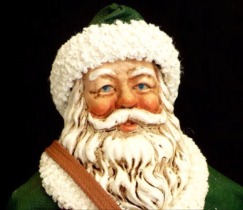