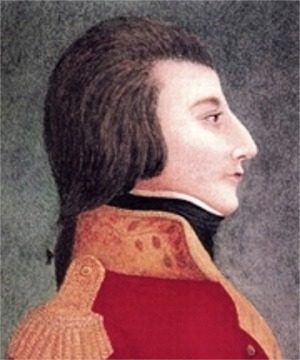 He was a member of the Protestant ascendancy of Ireland, the son of a Dublin coach maker who had inherited property in Bordenstown, County Kildare.  There were persistent rumors that he may have been the illegitimate son of the godfather for whom he was named, the cousin of the Viscount Kilwarden and a prominent member of parliament.  He was a member of the established Church of Ireland, college educated, a member of the aristocracy.  He was the most unlikely candidate to eventually earn the appellation of “The Father of Irish Republicanism.”  He was Theobald Wolfe Tone.

Tone studied law at Trinity, and while eventually qualifying as a barrister it was clear that a career in law would not be a match for his romantic and adventurous nature.   He had narrowly avoided a duel over accusation of an affair with another man’s wife and later impetuously eloped with another woman who would become his wife.  At Trinity, he was more interested in Irish history and debating politics than his law studies.  He was caught up in the fervor of American and French revolutions and a firm believer in the rights of man espoused by writers such as Thomas Paine.  Looking at his own country he concluded “the influence of England was the radical vice of our Government, and consequently that Ireland would never be either free, prosperous or happy until she was independent“.

Tone became a prolific writer in his country’s cause.   His first pamphlet (The Spanish War) was published in 1790 and argued for Irish neutrality and non-involvement in Britain’s wars.  However, perhaps his most revolutionary pamphlet was addressed to his fellow Irish Protestants:  “An Argument on Behalf of the Catholics of Ireland” urged their support for full civil rights for the majority of their fellow Irish.  Tone’s purpose was revolutionary “To unite the whole people of Ireland, to abolish the memory of all past dissensions, and to substitute the common name of Irishman in place of the denominations of Protestant, Catholic and Dissenter”

In 1790, Tone put his philosophy in action, becoming one of the founders of the Society of United Irishmen.  Originally seeking government reforms and representation of all the Irish people in parliament, the Society soon saw that the cause of freedom for all the Irish people could only come by independence.  England had maintained control over Ireland for hundreds of years by using the age old principle of “divide and conquer “, the thought of “United Irishmen” was seen as an immediate threat to that control.  England had sent  waves of colonist in an attempt to control Ireland  onlt to see them be absorbed into Irish Society; to become “more Irish than the Irish themselves.”   They thought they had solved that issue by introducing religious sectarianism into Ireland by the planting of Protestant colonistsin the 16th and 17th centuries.  Now the prospect of “United Irishmen”, people of all religions and classes unifying in the cause of Irish independance, threatend to destroy England’s most cynical and powerful weapon of domination.    England’s reaction was swift and predictable, to counter Tone and the United Irishman’s call for unity by  again stoking the flames of sectarian hatred using organizations such as the newly formed Orange Order.

Tone’s political activities eventually forced him into exile less he be imprisoned or hung as a traitor to the Crown.  Tone first immigrated to America, but found that the American Revolution had not yet completely removed in the new world the prejudices of the old.   Tone later traveled to Revolutionary France where he successfully pleaded for French military intervention in helping to secure an independent Ireland.  On December 12, 1796, Tone was a member of  a French invasion fleet of thirty-five ships that anchored in Bantry Bay, Co. Cork with thousands of French soldiers cramming their decks, waiting to invade Ireland and in conjunction with the United Irishman gain Ireland’s independence as the French had helped secure America’s independence from Britain a generation before.  However, strong winds caused the French acting commander to hesitate to wait for better landing conditions.  That hesitation proved fatal as the winds later became a gale, scattering the French fleet and canceling the invasion and what was likely Ireland’s best chance for independence to date.   Informer’s and the threat of arrest would lead to the premature rising of the Unite Irishmen in 1798 and while the rebellion met with some initial success, problems in coordination of the rebellion led to the undoing of the revolt  and the United Irishmen.  France did later land over a thousand French troops under General Humbert at Killala, County Mayo, but it was too little too late and despite an overwhelming victory by the French and United Irishmen at Castlebar they were eventually defeated.

Fate was not much kinder to Wolfe Tone than it had been to the Ireland loved.  On 16 September 1798, he sailed with a small fleet to Lough Swilly, where it was intercepted by the British Navy.  Despite being offered a chance by the French Admiral to escape, Wolfe Tone refused and instead took command of a ships battery and was later commended by the French for his courage.  Captured by the English and identified by a former friend, Wolfe Tone was tried and convicted of treason.  Tone requested that he be shown the dignity of a soldier and be shot, his request was denied and he was ordered to be hanged like a common criminal.   Rather than give his enemies the satisfaction of this humiliation Theobald Wolfe Tone committed suicide by cutting his throat in his prison cell.

The fight for Ireland independence has always been a struggle for right fought by those of conscience irrespective of faith.  Sectarianism is not native to Ireland; it is a weed that was transplanted and carefully cultivated as an instrument of colonial control.  When misinformed people fall victim to the fostered myth that Ireland’s continuing struggle for freedom is a “religious battle”, let us point them to the example of Wolfe Tone.