The often heard lament when people are faced with injustice or frustrated with the apparent state of affairs of society is “What can one person do?” Yet, if history teaches us anything it is that great events or movements rarely spring out of the ground fully formed; they can usually be trace back to one man or woman with a vision. Sadly and unjustly these great individuals are often eclipsed by the very people and events they inspired and made possible. No better example of this is the writer and poet Thomas Osborne Davis. 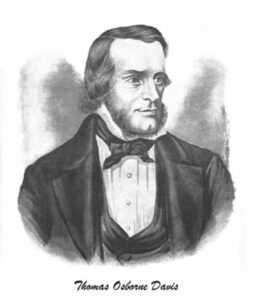 Davis was born in the town of Mallow in County Cork on 14 October 1814. He was the son of a Welsh father, a surgeon in the British Army who died shortly after his birth, and an Irish mother whose ancestry descended from Cromwellian planters. Little is known of Davis’ early life prior to his attending Trinity College; but such a pedigree would have seemed unlikely to produce an anti-Unionist Irish republican. Yet Davis joined the College’s Historical Society, which in previous years had among its members Wolf Tone and Robert Emmett. Davis was elected president of the society and immediately took it into a new direction. Prior to his election the society had become known for tedious speeches written “more to astound than to persuade”. Davis changed that; he spoke on real things, practical issues that were both relevant and inspirational. A frequent theme was education and how it was a moral duty for his peers to educate themselves to be of service to their country of Ireland. People who heard him speak described it as a “new light being shown on Ireland”. He graduated with a degree in law, but though called to the Bar in 1838 he never practiced.

In 1842, a chance meeting set Davis on the road to the destiny he is remembered for. Davis and his friend John Blake Dillion met a young journalist Charles Gavan Duffy. With youthful energy and naivety as to how difficult a task they were under taking, the three men decided to create a weekly newspaper devoted to the cause of an independent Ireland. They decided on the appropriate title of “The Nation” for their effort. This paper, organized by three young men ages twenty-six, twenty-seven and twenty-eight, was immediately recognized for its influence on Irish consciousness across the spectrum of the population. Its first edition of 12,000 copies sold out in a few hours.

When asked what was the tone of the “The Nation”, a British wag replied “a Wolfe Tone“. The paper stood for a sovereign Ireland and the repeal of the union with Great Britain. Davis and “The Nation” espoused Tone’s view that all of Ireland’s factions should find unity in the common title of “Irishmen”. The paper’s growing popularity and youthful energy soon attracted followers and jealousy from both sides of the political establishment who derisively christened Davis and his followers as “Young Ireland“.   Among Davis’ adherents were names that would write their own chapter in the history of Ireland and America: John Mitchel, William Smith O’Brien, Michael Doheny (who would as an exile found the 69th Regiment) and Thomas Francis Meagher who would command that regiment and the Irish Brigade in the Civil War.

The centerpiece of The Nation was Davis’ writing. He covered the gamut from advocating the use of Ireland’ water power to foster industrial development to admonishing his fellow citizens to be tourist in their own county first. However, what Davis is most famous for is poetry which still comes down to us today in works such as The Lament for Owen Roe and the lyrics to the beloved songs A Nation Once Again and The West’s Awake. Some snobbish modern critics are condescending of Davis’ verse, failing to realize that Davis was not an airy poet writing Odes to Grecian Urns for purely self-indulgent artistic reasons; Davis was a Bard in the Irish tradition memorializing great deeds and men in a style that would awaken the conscience of a nation.

Sadly, a great light such as Davis’ could not be sustained. He contracted scarlet fever and died on 16 September 1845; he was only 30 years old. This was a tragic blow for Ireland, one can only speculate on the course of Irish history if Davis with his intelligence, zeal and charisma had lived to develop into one of the country’s leaders. While not known at the time, Davis’ death was a double blow to Ireland; just days before the Dublin Evening Post printed “We regret to learn that the blight of the potato crop, so much complained of in Belgium and several of the English counties has affected the [Irish] crop”. In less than two weeks Ireland had lost Davis and the potato blight that was to lead to the Great Hunger had arrived.

It is against this backdrop we must evaluate Davis. Before Davis and his paper “The Nation” the memory of Wolf Tone, the United Irishmen of ’98 and the noble ideals they represented had almost faded away from the Irish memory. Davis resurrected their legacy and that of earlier Irish patriots and put muscle on the bones of their memory and strength into the causes they embraced.   Davis was the right man at the right hour; if not for the brief but illuminating life of Davis the concept of an Irish Nation with a unique heritage may have died and been buried with the one million Irish who succumbed to the brutal policy of an uncaring foreign government during the famine. Instead, Davis and his ideals were preserved in the hearts of those who survived this genocide and were also transported to the United States, Canada, Australia and Tasmania where they were protected, nurtured and grew until they could be transplanted back to Ireland where watered with the blood of patriots they would grow into an Irish nation, still a sapling that has yet to reach maturity.