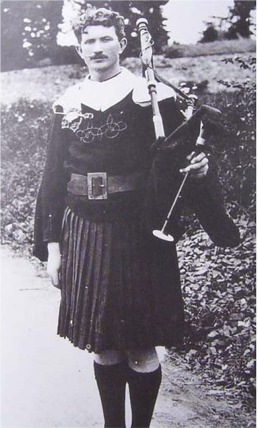 In his poem 1916, Y.B. Yates wrote describing the Easter Rebellion “All changed, changed utterly: A terrible beauty is born” to describe that watershed moment in Irish history. Yates, and most of us, attribute that pivotal moment to MacDonagh, MacBride, Connolly and Pearse. Yates, however, could not anticipate, and many of us do not remember the change that would be brought about by another man: Thomas Ashe.

Ashe was born in 1885 in the village of Lispole, County Kerry. Educated in the nearby town of Dingle and subsequently at the De La Salle College in Waterford, Ashe would become a National School Teacher and take a position as a Principal at Corduff National School in Lusk County Dublin. He was a popular teacher and a dedicated member of the Gaelic League and GAA. Ashe was active in the Dublin community, founding the award-winning Lusk Black Raven Pipe Band as well as Round Towers Lusk GFHC in 1906.

Ashe was also an active member in the Irish Republican Brotherhood, and his enthusiasm and determination to secure Ireland’s freedom quickly gained him attention. He was selected to go to America on a fundraising trip in 1914 where he met with Irish American leaders such as John Devoy. Back home in Ireland, he recruited men from the Lusk community in preparation for Irelands fight for freedom. As he approached everything in life, he was energetic and scrupulous in their preparation. His efforts would have dramatic effect.

During the Rising of 1916, Ashe commanded the Fingle Battalion of the Irish Volunteers. It was the only unit to be engaged outside of urban Dublin and one of the few that met with unqualified military success. Though severely outnumbered, Ash and his men captured the RIC barracks in Swords, Garristown and Ashbourne capturing vital arms and ammunition. Ashe’s command successfully demolished the Great Northern railway bridge; disrupting the movement of British troops and supplies that were attempting to reinforce crown forces engaged against volunteers in the capital. Ashe’s unconventional guerrila tactics, dividing his forces into columns making his forces appear to be larger than the numerically supeior British forces they were engaging, foreshadowed the tactics that would be employed so famously and successfully in later years by Dan Breen and Sean Hogan. Never beaten in the field, Ashe and his command surrendered to British forces at the order of Padrig Pearse with the collapse of the rising.

Ashe was tried by court martial and initially sentenced to be executed. This was later commuted to imprisonment in response to the world outcry in reaction to the execution of the leaders of 1916. Ashe was imprisoned with Eamon de Valera in Lewes prison where he quickly gained attention as a leader in continuing Ireland’s struggle for freedom and he was elected President of the Supreme Council of the IRB while still imprisoned. However, fate would intervene cutting short Ashe’s potential.

Released as part of a general amnesty in 1917, Ashe returned to Ireland. He was quickly rearrested under the notorious “Defense of the Realm Act” for “seditious speech” at a gathering in County Longford; it was now illegal for Irish men and women to even speak of freedom in their own land. Ashe was again tried by court martial and imprisoned in the infamous Mountjoy jail. Though convicted of political crimes by a military court, Ashe and his fellow republican prisoners were denied political status and treated as common criminals. Ashe and his comrades immediately began a hunger strike.

The response by British authorities was quick and brutal; depriving the prisoners of such basic necessities as their bedding and boots. This did nothing to weaken the resolve of Ashe and his fellow prisoners. The British then resorted to forcible feeding. Involving the insertion of a tube into the prisoner’s throat and forcing food into the prisoner, it was little better than torture. Despite all appeals by those concerned for his well-being in the face of such brutality for him to end his hunger strike, Ashe refused. Ashe responded to such well-meaning pleas by saying “They have branded me a Criminal. Even though I do die, I die in a good cause.”

On the third day of force feeding, Ashe was taken from his cell. Fionan Lynch saw Ashe being carried away to receive this treatment and called out to him: ‘ Stick it Tom boy’. Ashe called back ‘I’ll stick it, Fin’. They would be Ashe’s last words. The procedure that day was administered by a doctor in training and in forcing the feeding tube he punctured Ashe’s stomach and lung resulting in his death. Ashe was 32.

Thomas Ashe’s death sparked an international outcry. It is estimated that some 30,000 people followed his funeral procession. Thousands gathered to hear the funeral oration that would be delivered at his grave in Glasnevin, expecting to hear the oratory for which such events were known for, such as Padraig Pearse’s stirring graveside eulogy for the fenian O’Donovan Rossa. Defying the British, Irish Volunteers in the full dress uniform honored their fallen comrade with the traditional salute of rifle volleys. Ashe’s friend Michael Collins, himself dressed in the uniform of the volunteers, stepped forward for the eulogy. It was two sentences: “Nothing additional remains to be said. That volley which we have just heard is the only speech which is proper to make above the grave of a dead Fenian”. The age of heroic oratory had passed, replaced by an iron resolve to achieve Irish independence.

A “terrible beauty” was born that day, and Thomas Ashe had been key to that birth. His innovation in tactics would point the way in the coming struggle that would bring some measure of independence to the Irish people. His courage, when deprived of all physical weapons, to use his very life for the cause of freedom would inspire Terence MacSweeney and Bobby Sands. May we never forget him.