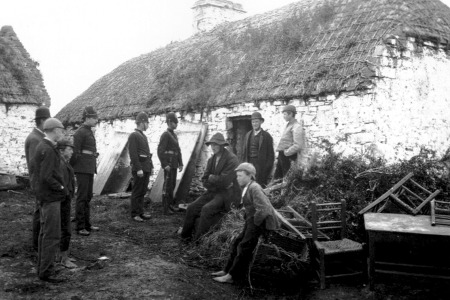 Since the time of the Bards, the Irish have been proud of, and justly famous for, their command of   language. Not only have they produced more than   their fair share of writers (Swift, Joyce, Yeats) but   they have also contributed more than their fair   share of words to the English language (galore,   caddie, slogan, spunk and fittingly enough gab).   In one case though, the Irish gave the oppressed   of the world not only a word, but a means for all   those who were downtrodden and oppressed to   fight for their just rights against the powerful.

In the 1870’s, several consecutive failed harvests   were bringing back memories of the Great   Hunger. The land of Ireland was owned by less   than 1% of the population, over half of the land   in the hands of only 750 families, many of them   absentee British landlords. Despite successive   crop failures, these landlords were not averse to   using the power of eviction to charge increasingly   excessive rents, often using improvements the   tenants themselves had made to the property as   justification. As in the dark days of Black ‘47 the   landlords’ agents were callously evicting tenants   when they couldn’t afford these extortionate   “rack-rents.”

Against this background arose two men: Michael   Davitt and Charles Stewart Parnell. Davitt was the   son of a Mayo farmer who was evicted during the   Great Hunger, forcing the family to immigrate to   England. In trying to help support his family, the   young Davitt lost one of his arms while working   as a child laborer in the notorious conditions of   a 19th century English cotton mill. Davitt went   on to become a journalist and an active member   of the Irish Republican Brotherhood, in whose   cause he received a fifteen year prison sentence.   However, Davitt was released after seven years   through the efforts of Charles Stewart Parnell’s   Irish Parliamentary Party. Parnell, the son of a   prosperous Anglo-Irish family, was considered   one of the great orators and politicians of his   age and dedicated to acheiving Irish Home   Rule. This unlikely alliance of the son of an   evicted tenant farmer and the son of an affluent   propertied family saw the current land crisis as   a unifying opportunity to take a stand for Irish   empowerment. Both Davitt and Parnell believed   that constitutional and coordinated nonviolent   action would offer a better chance to achieving     Irish aspirations than armed resistance that   the military might of the British Empire could   easily suppress.

In October 1879, Davitt formed   the National Land League with Parnell as its   leader. The National Land League goal was to   stop evictions and unfair rental practices with an   eventual objective of returning control of the land   of Ireland back to the native Irish people as a first   step to eventual Irish home rule.     On September 19, 1880, Parnell in a speech in   Ennis, County Clare posed the question to the   crowd “What do you do with a tenant who bids   for a farm from which his neighbor has been   evicted?” Various voices in the crowd shouted   “shoot him” or “kill him.” Parnell dismissed the   calls for violence and in a historic reply proposed   an alternate nonviolent solution:

The first target of Parnell’s tactic of social   isolation was the land agent of the wealthy Lord   Erne in County Mayo. The agent was a self   important man who was additionally a local   magistrate with a history of abusing his powers   in both capacities to further petty quarrels and   to show the residents “their place”. A few days   after Parnell’s speech, this agent gave orders to a   processor server accompanied by members of the   Royal Irish Constabulary (RIC) to serve eviction   notices on several tenant farmers. The eviction   party beat a hasty retreat when confronted at one   of the homes scheduled for eviction by a group   of angry local women. At this point, Parnell’s   strategy of social isolation was applied. Within   days, all of the agent’s house and farm staff had   quit, the blacksmith refused to shoe his horses,   the postman refused to deliver mail and, since   no store would serve him, food had to be brought   in from miles away by boat. A new word thus   entered the English language to describe this   tactic of social isolation taking the name of the   land agent it was first applied to: Captain Charles  Cunningham Boycott.

Seeing the united peaceful action of the Irish as   an indirect attack on the British Empire, English   newspapers and politicians called for action.   Funds were raised to transport fifty loyalist farm   workers to harvest Boycott’s crops. Despite   the fact that there had been no violence and   the Land League had assured that the protests   would remain peaceful, the fifty workers were   escorted by a combined force of one thousand   police and soldiers. It is estimated that the British   government spent £10,000 to harvest £350 worth   of potatoes.  Despite these face saving efforts,   Captain Boycott could not endure living as a   pariah and soon left Ireland to fade into obscurity   while his name went onto to become a verb   signifying the coordinated isolation of a person   or organization.

This was the first skirmish in a protracted political   conflict that came to be known as the “Land   War”, a war of ballots rather than bullets. The   coordinated actions of the Irish people almost   secured through peaceful and constitutional   means the Home Rule that Davitt and Parnell   envisioned till derailed by the militant actions   of men like Sir Edward Carson and the Ulster   Covenant. The example of the Irish Boycott has   been subsequently used in many parts of the   world where the disenfranchised seek to take   on the seemingly invincible. What should not   be lost on us on Irish Americans is the strength   and power we have when we act together in unity of purpose.