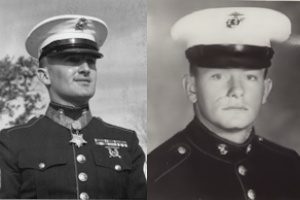 In the historically Irish neighborhood of Woodside, Queens stands a monument to those who made the ultimate sacrifice for their country in the Vietnam War.  On the monument is inscribed the names of 27 young men from the local Zip Code of  11377,  more than from any other postal code in the nation to die in that conflict.   However, the Irish community of Woodside has another special distinction touching on the Vietnam War, the story of two childhood friends from that community who would both enlist in the Marines and earn our nation’s highest award for valor, with sadly one also earning an inscription on that monument. Robert Emmett O’Malley and Thomas Patrick Noonan were born within five months of each other in that special neighborhood in 1943.  A picture of the 1949 Kindergarten class of P.S. 76 shows the two boys as classmates.  The two attended school and church together and were close friends throughout childhood.

After graduating High School, O’Malley enlisted in the Marines where not only he, but his three brothers would serve their country. On 18 August 1965, while leading his squad, they came under intense fire from a strongly entrenched enemy force pining his men.  With complete disregard for his own safety, O’Malley raced across an open rice paddy to the trench where the enemy was located.  Jumping into the trench, he attacked the Viet Cong with his rifle and grenades, and singly handedly killed eight of the enemy. He then led his squad to the assistance of an adjacent Marine unit which was also suffering heavy casualties where O’Malley personally assisted in the evacuation of several wounded Marines. Ordered to an evacuation point by an officer, Corporal O’Malley gathered his badly wounded squad and led them under fire to a helicopter. Although he himself was wounded three times, O’Malley continued to cover his squad’s boarding of the helicopters while, from an exposed position, he delivered fire against the enemy until the last of his men were safely on board. Only then did O’Malley permit himself to be removed from the battlefield. O’Malley would become the first living Marine to receive the Medal of Honor for service in the Viet Nam War.

Four Marines were wounded and pinned under continuous enemy fire. Noonan scrambled from his own position behind cover toward the wounded men, diving behind some rocks as he went. Finally “he dashed across the hazardous terrain and commenced dragging the most seriously wounded man away from the fire-swept area.” Although “knocked to the ground by an enemy round,” Noonan resumed dragging the man toward safety. “He was, however, mortally wounded before he could reach his destination.”  Noonan would be awarded the Medal of Honor posthumously for his selfless sacrifice.  After Noonan’s death in Vietnam, O’Malley remained in contact with the Noonan family and visited Noonan’s mother every year on Memorial Day.

On presenting the Medal of Honor to Robert Emmett O’Malley, President Johnson remarked “Every time I have awarded the Medal of Honor, I wonder what it is that makes men of this quality and I wonder what a man can say in the face of such bravery.” The fact that two men of such quality were classmates from the same Irish American neighborhood in New York who joined  253 other awardees of the Medal of Honor who list as the place of their birth Ireland in company with numerous  Irish Americans  is a strong testament to our heritage, culture and traditions  which historically has produced men and women of this quality with amazing regularity who have answered our Country’s call whenever needed.