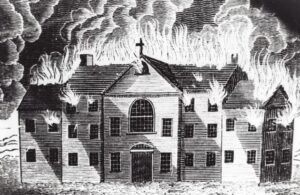 On a sweltering July night in 1834 Mr. and Mrs. Edward Cutter of Charlestown Massachusetts had just sat down to dinner when the family dog began barking incessantly at the front door.  Mr. Cutter opened the door to find a young woman, Sr. Mary John (before her vows Elizabeth Harrison) of the neighboring Ursuline Convent School on the front steps in her nightgown talking incoherently.  At the nun’s instance Cutter took her to the family of some of her former students who in turn notified the sisters at the convent.   The sisters notified Bishop Fenwick, informing him that Sr. Mary John had been suffering from exhaustion.  The convent school was always understaffed as there had been a sad history of many of the nuns, specifically those recently arrived from rural Ireland, succumbing to tuberculosis which was prevalent in the growing city.  Sr. Mary John had been teaching fourteen classes a day in addition to her religious duties as assistant to the Mother Superior.  The Bishop tried unsuccessful that night to see Sr. Mary John who refused to speak to him.  Respecting her wishes, he returned the next day with her brother and the Mother Superior.  Now much calmer, Sr. Mary John returned to the convent where she was nursed by her fellow nuns and visited by a doctor who diagnosed her as suffering from hysterics.   Within a few days Sr. Mary John made a full recovery and was amazed and embarrassed when told stories of her behavior, apologizing profusely for the trouble she caused and stating that “(she) must have been out of my head”.

There matters would have lain, if it were not the fact that Charlestown, Massachusetts in 1834 was a powder keg of suspicion and anti-Irish and Catholic bigotry with the Ursuline Convent School a frequent target.  The Ursuline community had been founded by the Ryan sisters from County Tipperary who had made their vows together and were soon joined by another group of ecclesiastical siblings, the three O’Keefe sisters  from Cork. All, as mentioned, would sadly succumb to early deaths in God’s service due to disease.  Ironically, the school catered to mostly Protestant students; in 1834 only six of the 47 students were Catholic.. The school was popular with the recently affluent more liberal Unitarian members off the city’s Protestant community who were eager for their daughters to acquire the “European style” education of music, arts and literature offered by the nuns.  The nuns themselves saw their mission as presenting a positive image of Catholicism, not for the purposes of evangelization (which the rules of the Order discouraged and former students testified the nuns never engaged in), but in the hopes that as these educated young ladies took their place in some of the communities leading families they would spread tolerance having seen firsthand that Catholicism was no threat. As noble as these sentiments were, they did not factor in that the old conservative Puritans that dominated the working class of Charlestown and neighboring Boston would see the convent school as the union of two groups of people  (affluent, progressive Protestants and Catholics) whom they despised. There had been numerous previous incident of hate directed at the convent including the burning of a stable at the convent, the killing of the nuns pet dog and the savage beating of their Irish born groundskeeper.

For two weeks after the return of Sr. Mary Joseph rumor fermented suspicion in the city.  An irresponsible press more intent on selling papers than reporting act, began printing stores of a “mysterious lady” who “they believed” had been abducted and was being held against her will (and perhaps even murdered) at the convent and called for a full scale investigation. The papers freely embellished their stories with unsubstantiated allegations from earlier discredited anti-Catholic literature.  Further fuel was added to the fire by the incendiary anti-Catholic/anti-Irish speeches being simultaneously given in Boston by the Rev. Lyman Beecher (the father of Harriet Beecher Stowe who would write “Uncle Tom’s Cabin”).  On Saturday evening, August 9th, a group of town officials made a visit to the nunnery and left fully satisfied that the reports of women being held against their will were baseless.  However rumor and intolerance were not to be easily defeated by fact. On Monday night August 11th, an angry mob of fifty to sixty men assembled at the convent and set fire to tar barrels on the convent grounds. Several fire companies were called to the scene, but declined to intervene, some members actually joining the rioters. The disturbance drew a large number of spectators swelling the crowd to over 2,000. The crowd broke down doors and windows to enter the convent, and began to ransack the buildings. The nuns gathered their pupils and escaped from the back pf the building to hide in the garden. At about midnight, the rioters set fire to the buildings, which burned to the ground.  Entering the crypt where they Ryan and O’Keefe sisters were laid to rest they desecrating the tombs, smashing skulls and taking the teeth as souvenirs.

Several men were charged with arson and burglary, but all save one were acquitted (and he was eventually pardoned)  by sympathetic Juries sharing the prejudices of the rioters and a defense attorney ho was allowed to put Catholicism on trail rather than the rioters.  The self-professed ring-leader of the riot later boasted “The testimony against me was point blank and sufficient to have convicted twenty men”.  This miscarriage of justice was followed by equally insincere expressions of sorrow by the Massachusetts legislature which though they passed  a resolution condemning the actions of the rioters defeated multiple bills to compensate the Ursulines for their failure to protect them.

Sadly, the use of ignorance and rumor to attack the Irish and Catholics is not just a 19th century phenomena.  In the summer of 2015, five Irish students visiting the U.S. on the J-1 Visa program and one Irish American were killed when the balcony of the apartment they were renting collapsed in Berkley California. Like the Boston papers of 1834, American papers, specifically the NY Times, were quick to publish speculative stories fueled by negative Irish stereotypes  and mixing in details from an incident involving other J-1 students several years prior to outrageously imply that the students were engaging in behavior that contributed to their own deaths.  Like the Charlestown officials who visited the Ursuline convent and found the hateful rumors unfounded,  investigators in Berkley found that the apartments that the students were renting had a long series of safety violations and the balcony in particular was improperly constructed and its supports rotted; the students were blameless victims.  Yet, to this day the original inaccurate story persists on the Times web site and is the first result returned by a Google search for this tragic incident, the Times never updating the story and an inadequate apology buried on an obscure Times blog page. Both stories illustrate the hateful persistent power of bigotry, stereotype and myth and why when we encounter them we should not be waved off with admonitions to “let it go” or “its only a joke” when our faith and heritage are attacked or defamed.