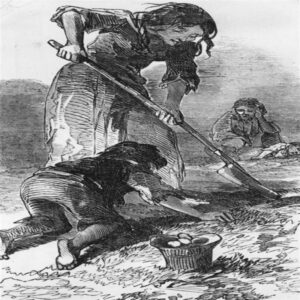 Between the years 1845 and 1851, Ireland lost at a minimum 25% of its population, with over one million dead and another million emigrating. The literal root cause being a mold Phytophthora infestans which destroyed the foundation of the Irish diet based on the potato. This period is inaccurately referred to as “the Irish Potato Famine”, but this obscures the true source and accountability for the tragedy which was rooted in British policy and prejudice toward the Irish. The Irish name An Gota Mor, “the great hunger” is more accurate for it was not only food which was in short supply in British governed Ireland, but humanity and justice.

Today’s textbooks will often cite the over-reliance of the Irish on the potato as the reason why Ireland was so severely impacted by the potato blight which was simultaneously destroying the potato crops in mainland Britain and much of Europe. The question often not examined is why? Failure to ask this question can lead to the inaccurate conclusion that the Irish sowed the seeds of their downfall, a myth that echoes the propaganda which British bureaucrats tried to foster to escape their own responsibility. However, the dependency on the potato as the staple of the Irish diet was a matter of forced necessity, not bad farming practice. The constant division and subdivision of property as British landlords attempted to extract every penny from their holdings created a situation where only the potato could be grown on these plots in sufficient quantities for tenants to feed their families. In good times when the crop flourished, the potato, supplemented with some protein from milk, was a complete source of nutrition. Visitors to Ireland often remarked that despite the clear destitution suffered by the common Irish they were remarkably fit and healthy. This was the reason why Ireland was a prime hunting ground for British recruiting sergeants in search of cannon fodder (during the Napoleonic wars it was estimated that a third of Wellington’s troops came from Ireland, a debt which England failed to remember during the famine).

The fact that in the early 19th century the vast majority of the people of Ireland were on the knife edge of a calamity waiting to happen was well known. There had been the warning signs of numerous smaller famines in earlier years. From the act of Union in 1800, wherein Ireland allegedly became an equal member in the United Kingdom under direct rule from Westminster, to the famine 150 committees and commissions had warned that Ireland was a human catastrophe in the making. In 1835, ten years before the famine, the French political scientist de Tocqueville wrote of a visit to Ireland “You cannot imagine what a complexity of miseries five centuries of oppression, civil disorders, and religious hostility have piled upon this poor people.” The British Wheatley Commission on Irish poverty had suggested that fisheries be developed, land reclaimed for development, and emigration opportunities offered. All the warning signs and guidance were ignored; for while the Crown claimed Ireland as a part of the United Kingdom, it took no responsibility for its Irish subjects; Ireland was part of “our kingdom” when it was a beneficial and “their country” when there was a problem.

Unique among areas suffering a famine, Ireland remained a food exporter. During the worst year of the famine, Black ‘47, Guinness exported over 300,000 gallons of stout to Britain (the Guinness Family who have always been Unionists donate a mere £160 to famine relief). In the years 1846 and 1847, Ireland exported 430,000 tons of grain. Apologists attempt to argue that holding back these exports would only have “a minimal effect” in offsetting the loss of the potato crop. The question which must be asked of these revisionists is how many lives are in that “minimal effect”. It must also be noted that to protect these exports the British government maintained (and fed) 100,000 troops in Ireland.

However, it is the English attitudes toward the famine in Ireland which is the most telling in that the “Great Hunger” was no mere famine, as evidenced by their own words. Queen Victoria’s economic adviser Nassau Senior expressed his fear that the Irish famine “would not kill more than one million people, and that would scarcely be enough to do any good”. As Assistant Secretary to HM Treasury and chief administrator of famine “relief “, Trevelyan echoed Dickenson’s Scrooge in describing the famine as an “effective mechanism for reducing surplus population” and “the judgement of God” on the ” moral evil of the selfish, perverse and turbulent character of the (Irish)”. As over a million Irish forced from their homeland crowded onto “Coffin Ships” a London Times Editorial crowed “Thanks to a bountiful Providence, the Irishman on the banks of the Shannon will soon be as rare a sight as the Red Indian on the banks of the Hudson.” Are these the sentiments associated with dealing with a famine or sentiments of inhuman opportunists perverting a natural disaster into a biological weapon?

The Irish famine was a genocide by any reasonable definition of the word, any time people try to excuse, revise or apologize for it we should as Irish Americans be offended. Those today who dismiss it today as an ecological disaster are just dressing Trevelyan’s “providence” in scientific wrappings. The historian David McCullough observed “History is who we are and why we are the way we are”; certainly that is true of the history of An Gorta Mor. The hardship and trials of the hunger forged a new Irish people and we as its descendants must thwart any attempt to mitigate our ancestors suffering if we are not to denigrate their greatness.