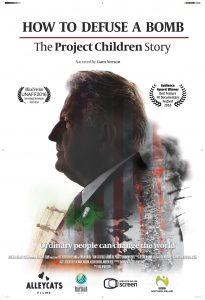 Join Division 3 in Celebrating Irish American Heritage Month and the story of a truly great Irish American Denis Mulcahy and his efforts to rescue the future of the children of Northern Ireland from the violence of the troubles in a special showing of  the award winning documentary “How to Defuse a Bomb, The Project Children Story” on Friday March 10th at Hibernian House.

The untold story of how—over a forty-year period—an NYPD cop brought over twenty-three thousand children from the worst areas of the troubles in Northern Ireland to America for a summer of getting away from it all, not only winning their hearts and minds, but also influencing American politicians and contributing to winning peace in Northern Ireland. In 1975 Denis Mulcahy—an Irish Immigrant—decided he couldn’t stand idly by whilst Northern Ireland blew up on his nightly news bulletin. Along with his family and neighbors in small town New York he started a scheme that would ultimately see twenty-three thousand children escape the worst of the violence and in the process discover they had more in common with the ‘enemy’ at home than they thought. From the seemingly intractable conflict of the early seventies to the signing of an historic agreement in the late nineties, we chart the incredible story of how one man’s visionary approach to reconciliation paved the way for peace in Northern Ireland.

Our Special Guest of Honor for the evening will be Denis Mulcahy himself. Doors will open at 7:00PM with a meet and greet reception to be followed by the film at 8:00PM. The evening will conclude with a Q&A session.