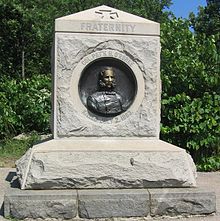 Since its earliest history, sport has held a central role in Irish culture. The game of Hurling is one of the oldest in the world and can trace its roots back 4,000 years. Athletic prowess was a hallmark of all of Ireland’s great mythic heroes; the legend of Cú Chulainn begins with him as a boy killing a gigantic hound attacking him by hitting him with the sliotar (hurling ball) from his hurley. Irish games were such an integral part of Irish identity that they were repeatedly banned by the English in their attempts to force cultural assimilation. Their efforts may have succeeded if not for another giant of a man; Michael Cusack.

Cusack was born on September 20 in the famine year of 1847 in the parish of Carron on the eastern fringe of the Burren in north Clare; a place steeped in the glories of Ireland’s ancient past and scarred by its degradation under colonialism. His father was a humble herdsman and Irish was his first language. Cusack attend the Carron National School when it opened in 1858. He soon proved himself an excellent student; earning an opportunity to attend university and become a teacher. Cusack taught in Blackrock and Kilkenny Colleges before establishing his own highly successful academy to help prepare students for university and civil service examinations which were widely viewed as the doorway to the middle class for the Irish. At one-point Cusack was earning £1,500 a year; a considerable sum for the time and a considerable achievement given his modest rural beginnings.

However, sport and Irish culture were Cusack’s first love. He was an all-around athlete who in addition to his beloved hurling played rugby, cricket and won renown in the shot put. Cusack soon organized a hurling team out of his academy. Cusack was also an early proponent of the Irish language movement and an advocate for Irish self-determination. Cusack soon became dissatisfied with the elitism of British administrated sports in Ireland. Sport was regarded as the exclusive province of “gentlemen” and Anglo-centric with no room for Irish games or the Irish working class. British controlled governing bodies scheduled events on Saturday, then a workday for most of the Irish population, while in deference to Protestant belief banning sporting activities on Sunday, the traditional day for Irish games and the working class’s only day of leisure.

It was reported that a turning point was reached for Cusack when on a walk in Dublin’s Phoenix Park with his friend and fellow nationalist Patrick Nally. The two men noted the great park was empty of young people playing any sports. Cusack saw this as a sign of the decay of the Irish spirit and culture; from that point devoted his considerable energy to restoring the vibrancy and prestige of Irish sport. In 1882 he attended the first meeting of the Dublin Hurling Club, formed ‘for the purpose of taking steps to re-establish the national game of hurling’.

A second pivotal moment came in 1882 when Cusack witnessed a hurling match between two teams that was frequently stopped as each team followed a different set of rules. It became clear to him that if Irish games were to grow a national organizing body was needed to establish uniform rules and govern Irish sport. On October 11, 1884, Cusack published an article ‘A Word about Irish Athletics.’ To make his case, Cusack tapped into growing Irish nationalist sentiment: “No movement having for its object the social and political
Michael advancement of a nation from the tyranny of imported and enforced customs and manners can be regarded as perfect if it has not made adequate provision for the preservation and cultivation of the National pastimes of the people”. The article drew such favorable response that a week later Cusack published a letter announcing that a meeting would take place in Hayes’s Commercial Hotel, Thurles on November 1, 1884. At that meeting the ‘Gaelic Athletic Association for the Preservation and Cultivation of national Pastimes’ later shortened to the ‘Gaelic Athletic Association’ (GAA) was formed with Maurice Davin as President and Cusack as its Secretary.

Cusack approached the new position with the energy and single-minded purpose which defined him. He astutely gained the support of 19th century Ireland’s most prominent institution, the Catholic Church, by securing the blessing and support of Archbishop Croke along with the sponsorship of prominent nationalist leaders Charles Stewart Parnell and Michael Davitt. In organizing clubs on parish lines with representative County teams, Cusack tapped into a ready supply of local pride to fuel newly formed teams. In less than two years there were over 600 GAA clubs throughout Ireland.

Cusack’s success in transforming Irish sport and winning the hearts and imagination of the public from the sporting establishment came at a terrible personal cost. His laser-like focus and dedication caused him to step on toes and alienate people. Legend says that Cú Chulainn would work himself into a frenzy where he could no longer distinguish friend from foe; Cusack appears to have been afflicted with the same condition. His zeal often manifested itself as arrogance and he did not suffer anyone viewed as an impediment (characteristically he once wrote to a critic “I am in receipt of your letter, which I burned”). Cusack was a dynamo with little regard for administrative tasks. The result was that in a short 18 months he was expelled from the leadership of the organization he created.

Sadly, his removal as GAA secretary began a downward spiral in Cusack’s life. His academy failed, likely due to his dedication to Gaelic games. His attempts to establish a newspaper also collapsed. At the end of his life, Cusack was destitute, moving the GAA to vote him £50 in recognition for all the unpaid work he had done for the sport. ‎Cusack died on November 27, 1906 at the age of 59.

Perhaps the greatest indignity to Cusack was perpetuated by James Joyce whose character of “the Citizen” is a thinly veiled caricature of Cusack; the name itself coming from Cusack’s trait of addressing people as “Citizen.” While the characters brashness and zealotry are appropriate, there is no evidence for the xenophobia and anti-Semitism the character displays in Cusack. Joyce depiction speaks more of his unease as an Irishman who wished to put his origins behind him when confronted with Cusack who wore them as a badge of honor.

Cusack was not perfect; his single-minded zeal made him a problematic personality. However, someone without his passion and self-confidence would have shied from the daunting task of finding a place in the sun for traditional Irish games. Today the Irish games of hurling, football, and camogie, so close to being extinct in the 19th century, are played around the world. In 2019 the All Ireland Football final had an attendance of 82,300 people and was watched by 1.3 million worldwide.

May we all have a little bit of Cusack’s fervor for our heritage.