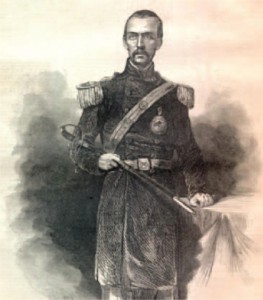 When we think of courage, our mind naturally drifts to people who brought their lives in harms way for the sake of others. Less often do we think of courage in the moral sense, to do what is right irrespective of the personal consequences. Both forms or courage are rare, and even rarer is the person who embodies both of them. Such a person was Michael Corcoran.

Corcoran was born in 1827 at Carrowkeel, County Sligo. Corcoran attend the National School and appears to have attained a good education. In 1845 at the age of 18, Corcoran received an appointment to the Revenue Police, whose principle task was locating and arresting moonshiners. Though hazardous work requiring going up against hard men in the isolated mountain areas of Ireland, it was a position that would guarantee a comfortable middle class life.

Such thoughts of bright prospects would soon be put aside by young Michael. At the time of his appointment in 1845, the Great Hunger was arriving in Ireland. By 1847, famine and disease held Ireland firmly in its grip and nowhere more so than in Donegal where Corcoran was now stationed. Horrified by the suffering of the Irish and appalled by the callous indifference shown by the British government, Corcoran joined the Ribbonmen, a secret society that is an ancestor to the Ancient Order of Hibernians that fought back against ruthless landlords and their agents who were terrorizing the famine stricken Irish people. Corcoran led this double life for over a year, knowing that a charge of treason and execution awaited him if he was caught. Corcoran came under suspicion in 1849, forcing him to flee to the United States where, like many other of his countrymen he arrived with little money and few prospects.

Corcoran worked at a variety of odd jobs till he eventually he found employment with John Heeney, proprietor of “Hibernian Hall,” one of the most popular gathering places for the NY Irish community and a meeting place for the Ancient Order of Hibernians. Starting as a bouncer, he soon worked his way up to manager. Corcoran quickly developed a reputation for assisting anyone in the Irish community whom he could aid. When some members of the Irish community decided to form a militia unit, both to show their devotion to an America that had taken them in and to prepare for the liberation of Ireland, Corcoran enlisted as a private, but such was his popularity that he rapidly rose to the rank of Colonel. This unit was to eventually become the famous 69th. Corcoran was no mere figurehead playing at soldiers, one of his commanders calling him “one of the best officers in the militia.” Once again fate seemed to be smiling on Corcoran, offering him a life of prosperity and respect, but once again Corcoran would be called to decide between self interest and principle.

In October of 1860, the young Prince of Wales, heir to the British throne, would visit New York. New York’s elite went into a royal frenzy. A military parade was planned to be reviewed by the Prince followed by a Grand Ball and fireworks. Among the units ordered to parade was Corcoran’s 69th. Corcoran and his fellow Irish Americans of the 69th realized that an Irish American regiment parading in front of the heir to the British throne could be used by the English as a propaganda coupe, undercutting those fighting for independence in Ireland. Because members of militia units served at their own expense, they were protected by New York state law from being called out excessively for parades. The 69th had already fulfilled its obligation for the year for parades and voted not to participate in the review for the Prince. In making known the regiments decision not to participate, Corcoran stated that he, as commanding officer “could not in good conscience order out a regiment composed or Irish-born citizens to parade in honor of a sovereign under whose reign Ireland was made a desert and her sons forced into exile.” Corcoran had already returned his tickets to the Grand Ball with a note that he “(was) not desirous of joining in the Festivity.”

The Anglophiles of New York’s elite were outraged at Corcoran’s and the 69th’s impertinence. Anti-Immigrant nativists seized upon the refusal to parade (though the 69th was within its legal rights) as a sign that the Irish were disloyal and could not be “true Americans.” Corcoran was ordered to appear before a Court Martial, where if he was found guilty he faced a stiff fine, imprisonment, dismissal from the militia and disgrace. The charges were soon dropped however when the Confederates fired on Fort Sumter, the need for Corcoran and the soldiers of the 69th was too great. Corcoran and the 69th were soon marching south and to the first battle of the Civil War: First Bull Run.

At Bull Run, Corcoran and the 69th distinguished themselves as one of the few steady regiments in what would prove to be a disaster for the Union. While directing a rear guard to buy time for the Union Army to retreat, Corcoran and several of his officers were captured.

Even in the early war, conditions for Union prisoners held by the Confederate were severe. Corcoran would endure 13 months as a prisoner in horrific conditions. Offered parole and freedom if he swore never to take up arms against the Confederacy, Corcoran characteristically refused, putting his duty as a soldier ahead of his own needs. Corcoran was eventually exchanged for a Confederate held in Union custody and released unconditionally.

His gallant courage on the battlefield and as a prisoner of war had silenced any questioning of his loyalty. England’s subsequent support for the Confederacy had vindicated to the American public the 69th’s decision to not honor the heir to the throne. Yet for his convictions Corcoran paid a terrible price. While he raised a new unit, “Corcoran’s Irish Legion” and returned to the fight for the Union, Corcoran’s health had been permanently damaged by his confinement as a prisoner of war. He died in December of 1863 of a stroke, age 36.

While Corcoran’s Civil War military career pales when compared to Grant, Sherman or Chamberlain, his life as a man of principles has few equals. He was a man willing to take a stand for his country and heritage no matter what the personal consequences, an example that should inspire us all.