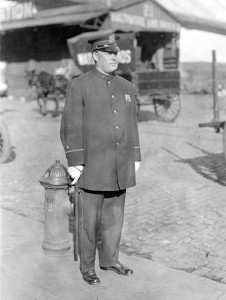 There once was a time when Irish giants roamed the earth; their feats of strength and courage becoming legendary. However, these were not the mythical Cuchulain, or Finn McCool; they were real men who pushed the boundary of what was thought to be humanly possible. They were known as “the Irish Whales” for their size and strength and they dominated the strength events of the Olympics for the first part of the twentieth century. This was in an age when Olympic athletes were held to a strict amateur code, there were no high priced endorsement contracts, and more than a few of these “gods of the arena” could be found pounding a beat on the streets of New York when not competing. None was more renowned among these giants than Matthew McGrath.

McGrath was born on a small farm in Nenagh, County Tipperary in 1876; the oldest of eleven children. He began building his strength  early behind a plough and in the backbreaking labor of the harvest.  For what little recreation there was to be found on a farm, Matt would read books on Greek mythology and the ancient Olympics or listen as his parents tell stories of Irish folklore around the fire on cold winter nights. Appropriately as it would come to pass, a favorite story of young Matt’s was a tale of a landlord who challenged one of his tenants to throw a sledge and the tenant beat him soundly. The tale inspired the young McGrath to take up throwing the hammer, the event for which he would gain world renown.

McGrath emigrated to America at the age of 19. Like many Irish immigrants he traveled light: a single carpet bag with one spare shirt, socks and the princely sum of six pence in his pocket. However, like those Irish emigrants before and after him, all young McGrath asked upon arriving in America was an opportunity. His first job required him to work thirteen hours a day, seven days a week. Yet, true to a promise made to his mother to “treat his body like a temple”, McGrath still made time to exercise; going to the local blacksmiths and lifting the anvil followed by throwing an improvised weight against a mattress he had hung on a wall. With such Spartan discipline McGrath was soon an imposing figure standing six feet tall and weighing 248 pounds.  McGrath became an American citizen in 1899 and joined the New York City Police Department in 1902, the start of a nearly forty year career where he would rise from Patrolman to Inspector. During the course of his NYPD career McGrath would  twice earn the Medal of Valor: once for subduing a fleeing armed murderer and the second for jumping from a bridge into icy cold water 30 feet below to rescue a man who had accidentally fallen.

However it was in track and field and the Olympic games that McGrath would gain international notoriety. McGrath was to capture twenty-one National Championships in weight throwing and compete in four Olympiads between 1908 and 1928. McGrath’s first appearance was in the contentious 1908 London Olympics, an Olympics marked with controversy from the start. It was to be the first Olympics with an opening ceremony of a parade of the athletes behind “their countries” flags. Many Irish athletes refuse to march behind the flag of Great Britain, Finns refused to march behind the flag of the Russian empire that ruled them at that time. The American team complained that while the flags of most of the participating nations (and even some that were not!) were flying above the stadium the American flag was omitted. The team became more enraged when the British Olympic committee offered the lame excuse that it was because “they couldn’t find an American flag in London.” As the respective teams marched into the stadium and approached the royal box they were expected to dip their flag in salute to King Edward VII. The American flag was being carried for the U.S. Team by young shot putter Ralph Rose. Legend has it that as he approached the royal box he heard McGrath’s unmistakable Nenagh accent saying “dip that flag and you will be in a hospital tonight.” The U.S. flag was not dipped, a tradition that remains to this day, an action that was later defended by team captain and fellow NYPD officer and Irish American Martin Sheridan with the famous retort of “That flag bows to no earthly King.” McGrath would earn a silver medal in the 1908 Olympics, bested only by another Irish American and NYPD officer John Flanagan. In the 1912 Stockholm Olympics, McGrath won the gold medal in dominating fashion (the shortest of his six throws was over 15 feet longer than any other competitor’s best throw) and set an Olympic record that stood for 24 years. World War I deprived McGrath and other athletes of a chance to compete in 1916 and one can wonder at what records he may have set. At the 1920, Olympics in Antwerp, McGrath finished fifth after injuring his knee during the competition. In 1924 in Paris, McGrath again took the silver medal, setting (and still holding) the standard for the oldest American track and field medalist ever. An off day at the 1928 Final Olympic try-outs barely kept him off the 1928 Olympic team at the age of 52. In describing McGrath’s Athletic career U.S. Track and Field Federation historian Hal Bateman stated “Without doubt, Matthew McGrath is an Olympic legend. For him to have competed for as long as he did, in that day and age, is incredible. He was a very outstanding athlete on an elite level – a national champion in 1926 at the age of 50… To do this nowadays is almost unthinkable!”

One other part of Matt McGrath’s life must be mentioned, one for which he never received public media acclaim nor gold medals. After he and his wife lost their only child at a very young age, the McGrath’s became attached to a young Chinese lad whose father worked at a guest house they frequented in the summer. They became aware that the young man’s father had lost his job, his mother having previously deserted the family. The McGrath’s opened their hearts and home to the boy and said he could stay with them for a few weeks until the father got back on his feet. The few weeks quickly turned into years and the McGrath’s were appointed legal guardians of the boy whom they sent to a prestigious private school and ensured that there was a small annuity for the young man when Matt McGrath’s giant heart stopped beating in 1941 at the age of 65.

The accomplishments of Matt McGrath would be enough to fill the lives of ten men. May we never forget this gentle Irish American giant for his strength, courage and humanity.