The recent HBO Mini-Series The Pacific has brought a long overdue recognition to the sacrifices and hardships endured by the U.S. Marines in the Second World War. These battles were fought on isolated islands that one would struggle to locate on a map: Guadalcanal, Roi-Namur, Saipan-Tinian, Peleliu, Okinawa. Combat was often at point blank range; not only did the men involved battle the enemy, but poisonous snakes, insects, disease and the climate. Nowhere was the fighting harder than the Battle of Iwo Jima, a battle where Admiral Nimitz later observed “Uncommon Valor was a Common Virtue.” No one typified that valor more than Joseph Jeremiah McCarthy. 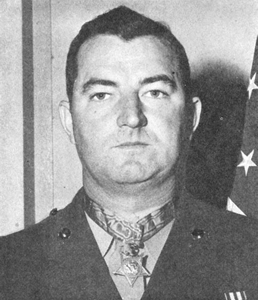 Joseph Jeremiah McCarthy was born in Chicago Illinois on April 10, 1911. An excellent athlete, he was an all-state guard in football and hit the game winning home run to capture the city’s baseball championship for his high school. McCarthy joined the Chicago Fire Department and was assigned to the city’s Truck Company 11 before enlisting in the Marines on February 20, 1937. McCarthy served for four years and had been discharged, but was recalled to service as a Gunnery Sergeant just prior to the attack at Pearl Harbor. McCarthy was soon noted for his leadership ability and experience, and was selected for an Officer’s commission.

As a member of the 4th Marine Division, McCarthy was deployed overseas in January 1944. At Saipan while leading a rifle company, he earned the Silver Star and Purple Heart for carrying two wounded Marines to safety while under enemy fire. In his book Iwo Jima: Legacy of Valor, Historian Bill D. Ross Described McCarthy as “… Irish and he looked it: husky, red complexioned, pug nose. Superior officers sometimes found his manner abrasive… (while) his men called him “the best damned officer in the Marine Corps.”

It was at the battle of Iwo Jima that McCarthy’s courage and leadership really came to the fore. If there is an entrance to Hell from Earth, then it would be Iwo Jima. The volcanic island constantly emitting brimstone fumes, the surface lifeless, waterless and covered in black choking ash. Even such basic protections as a foxhole were denied, for under the ash was impenetrable obsidian. What nature had created the Japanese General Kuribayashi and his command perfected: they had created a labyrinth of interlocking defense including concealed pillboxes which could be accessed by a maze of tunnels blasted into the Island and all but impervious to bombing and bombardment. Finally, there was the resolve of the Japanese themselves. They knew that it was impossible to defeat the Americans. Their goal was to sacrifice themselves to inflict as many American casualties as possible in hopes of gaining an advantage in peace negotiations. General Kuribayashi forbade the suicidal Banzai charges that had marked early Japanese defensive tactics; he gave orders that each man was to hold his position and kill at least 10 US Marines before dying himself. When the invasion began, he had his men hold their fire until the beach was crowded with US Marines who mistakenly believed that the pre-landing naval bombardment had silenced all opposition. Then General Kuribayashi unleashed hell.

It was in this maelstrom that now Captain McCarthy and his men found themselves. On the third day of the battle, 21 February 1945, McCarthy and his company were pinned by uninterrupted Japanese rifle, machine gun, and artillery fire. McCarthy quickly organizing an assault team which he then proceeded to lead across 75 yards of open ground under constant enemy fire. McCarthy personally charged a heavily fortified bunker, hurling hand grenades into the emplacement completely destroying the enemy position. McCarthy then led his team in an assault on a second pillbox which was similarly destroyed. Entering the ruins, McCarthy found a Japanese soldier taking aim at one of his men whom McCarthy disarmed and shot him with his own weapon. McCarthy then rallied his men and proceeded to capture the entire ridge. Of the assault, McCarthy in his characteristic no nonsense style stated “I was scared all the time”… “Any man tells you he wasn’t scared was an imbecile. But you dealt with it.” McCarthy and his men would continue to fight on Iwo Jima for another 33 days. Of 347 who served in McCarthy’s company during the battle, only 35 were able to walk off the Island when the battle was over.

For his heroic actions at Iwo Jima, Joseph J. McCarthy was awarded the Medal of Honor in addition to a second purple heart.. When presenting the Medal, President Truman told McCarthy, “I’d rather have one of these than be President.” McCarthy viewed the award unromantically, saying in later years “I would hope and pray there never be another Medal of Honor issued, I hope and pray there’s never any more wars. But we’ve got to remain strong.” McCarthy was discharged with the rank of Lt. Colonel.   After the war McCarthy visited many of the families of his Marines who had been killed in action on Iwo Jima. Each one of them, he told the families, had been just as brave as he was, just not as lucky.

Joseph McCarty returned to the Chicago Fire Department where he became the Superintendent of Ambulances in the Chicago Fire Department, a position he held till his retirement in 1973.  In 1959 McCarthy was honored by the Chicago Irish community by being named the Grand Marshal of their Saint Patrick’s Day Parade.   Joseph McCarthy passed away on June 15, 1996.  As one of his fellow Marines stated, “(McCarthy) was not a one-shot hero, he was a hero at every campaign and everything he did.”