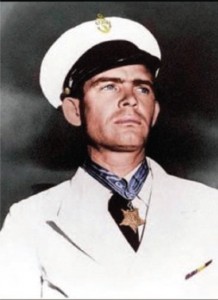 With the passing of years and in a growing climate of “political correctness”, the shock and horror of Pearl Harbor, the day “which will live in infamy”, appears to be forgotten. Movies like “Letters from Iwo Jima” depict the forces of Imperial Japan as sympathetic victims forgetting that on December 7th, 1941 the Japanese Navy without a declaration of war launched a deadly sneak attack against the civilian and military population of Hawaii while people were asleep believing they were at peace.

One such person was John William Finn. Born in Compton, California in 1909, Finn had dropped out of school and enlisted in the Navy at the age of 17. Now at 32, Finn had risen to the rank of Chief Petty Officer and was assigned as the chief aviation ordanceman in charge of a detail of twenty men at Kaneohe Bay Naval Air Station on Oahu.

On the morning of December 7th, Finn was at home with his wife when he was awakened by the sound of gunfire and a neighbor knocking on his door yelling that he was needed at the base right away. Still not fully aware what was going on, Finn jumped in his car and proceeded to the air strip observing the base speed limit until a plane passing overhead revealed the Japanese “Rising Sun” insignia on its wing. According to Finn, at that point “I threw it into second [gear], and it was a wonder I didn’t run over every sailor in the air station.“

On reaching the hangers, Finn arrived at a scene of hell and chaos with men scrambling between burning planes trying to find cover or a means to defend themselves. Finn spotted his squadron’s painter who was carrying a 50 caliber machine gun salvaged from one of the damaged planes. Finn commandeered the gun from him. As he observed later, “I knew I had more experience firing a machine gun than a painter.”

Finn took the gun and mounted it on a movable platform used for training. Finn pushed the platform and all the ammo he could find into an open area where he had a clear view of the attacking Japanese planes, ignoring the personal risk that this also meant that he was completely exposed to enemy fire. Finn said, “I got the gun and I started shooting at Jap planes..in some cases I could see [the pilot’s] faces.”

For the next two hours Finn would conduct his personal war with the attacking Japanese. He continued to fire his improvised antiaircraft gun despite the fact that he received 21 distinct wounds including a bullet through his foot and a shrapnel wound in his shoulder that caused him to lose the use of his left arm. Still Finn kept up his personal counterattack: Finn is credited with shooting down at least one enemy fighter and is believed to have damaged several. “I can’t honestly say I hit any,” Finn said modestly during a 2001 interview, “But I shot at every damn plane I could see.”

Finn did not leave his position until he was ordered to seek medical attention. Finn said when he got to sick bay, he saw many worse off than he. He allowed the medics to bandage him and then checked himself out to return to the armory where he spent the rest of the day and night repairing damaged weapons in case of a further assault. Given a second and more explicit order to seek medical attention, Finn would spend the next two weeks in hospital.

Finn was presented the Medal of Honor on board the USS Enterprise by Admiral Chester Nimitz on September 14, 1942. With typical modesty Finn would downplay his heroism. “I was just an uneducated man who got mad as hell one day.” When called a hero in a 2009 interview, Finn replied, “That damned hero stuff is a bunch of crap, I guess. […] You gotta understand that there’s all kinds of heroes, but they never got a chance to be in a hero’s position.”

Finn would continue to serve in the U.S. Navy until 1956, attaining the rank of lieutenant. After the war he returned to his home in California where he, his wife and son ran a small ranch. Finn and his wife also became foster parents to five native American Indian children, resulting in the Finn’s being honored by the Diegueno tribe. Finn was also a member of the Ancient Order of Hibernians.

John William Finn remained active on his ranch until shortly before his death on May 27, 2010 at the age of 100. He is buried on the Indian Reservation of the children to whom he was a foster father. He was the last surviving recipient of the Medal of Honor for actions rendered at Pearl Harbor. His Medal of Honor Citation concludes that Finn’s actions were “in keeping with the highest traditions of the U.S. Naval Service.” His example of service and dedication, both in military and civilian life, are also in keeping with our highest traditions as Irish Americans and Hibernians. It is our duty to see that the memory of John William Finn and Irish Americans like him are never dimmed by time nor “political correctness”.