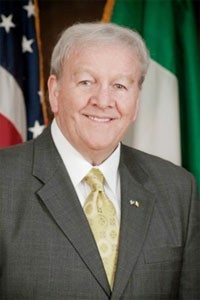 We deeply regret to inform you that our brother Hibernian Terry Greenan has passed away.  May he rest in peace.  Please keep Terry and his family in your prayers.

Please see the obituary below and join us for a Hibernian Ritual at the wake on Sunday at 7pm at Wyman-Fisher .

Terence (Terry) Greenan of West Nyack, NY died Thursday, September 10, 2015 at home surrounded by his family. Terry was born in Boyle, County Roscommon on November 26, 1941, the eldest of 5 children born to Josephine and James Greenan. A successful businessman, Terry is the proud owner of Greenan Business Products in New York City, celebrating its 44th Anniversary this year. Terry emigrated to New York in 1960. He proudly served in the United States Army from 1961-1964. In 1967, Terry married Margaret (Margie) Murray from County Leitrim, his wife of 48 years. He is the beloved father of Lisa Dorman and her husband Matt, Tina Daly and her husband Matt, Sean Greenan and his wife Kathleen, Terry Greenan Jr. and his wife Lori Beth and Amy Hall and her husband Josh. He is the proud grandfather of 11 grandchildren: Patrick (17), Kate (16), Ryan (15), Conor (15), Kevin (12), Olivia (11), John (7), Kyle (5), Jack (1), McKenna (3 months) and Luke (3 months). He is survived by his siblings: Eddie Greenan of Yonkers, NY, Margaret McCarthy of Ramsey, NJ, John Greenan of Boyle, County Roscommon and Jimmy Greenan of Point Pleasant, NJ. Terry was also the cherished uncle of many nieces and nephews. In 1975, Terry moved with his family to Carmel, New York. During his time in Carmel, he was active in the West Put Gaels Minor Football Club and Emerald Society. He was honored as the First Emerald of the year in 1976. In 1983, the Greenan family moved to Rockland County where Terry quickly developed a well-earned reputation for his hard work, determination and integrity. Terry served as President of the Rockland Gaelic Athletic Association, became a member of both the Friendly Sons of Saint Patrick and the Ancient Order of Hibernians Division III of Pearl River. Terry has been honored for his notable volunteering and leadership with the Business Man of the Year award at the Ancient Order of Hibernians Rockland County Emerald Ball in 1998 and as a 2009 Grand Marshall of the Rockland County Saint Patrick’s Day Parade. He will be missed dearly by all who crossed his path. A Mass of Christian burial will be celebrated 10:00 am, Tuesday at St. Anthony’s R. C. Church, Nanuet, NY. Burial will follow at St. Anthony’s Cemetery. Visiting is Sunday from 3 to 5 and 7 to 9 pm and Monday from 7 to 9 pm at Wyman-Fisher Funeral Home Inc. In lieu of flowers, please send memorial donations to Rockland Gaelic Athletic Association, PO Box 848, Pearl River, NY 10965