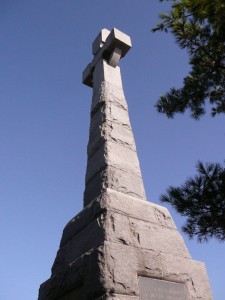 When most people think of immigration, our images are of smiling immigrants standing on the decks of ships clutching children and looking with hope as they sail past the Statue of Liberty. We think of the immigration center of Ellis Island as the “golden door” and the “Isle of Hope”. However, often overlooked is another Island that figures prominently in the story of Irish Immigration to America, Grosse Ile. Perhaps it is overlooked because, despite the fact that the intended destination of most who arrived there was the United States, it is located in our northern neighbor in the province of Quebec Canada. . Perhaps, it is ignored because it is a story of tragedy: instead of being a “golden door” to the new world it was for many a sad gateway into the next world.

As with so much of the story of “The Great Hunger”, an Gorta Mór, it is a story of greed and a government bureaucracy that stressed “efficiency” over humanity. Despite the fact that Ireland was allegedly a fully incorporated member of Great Britain by the Act of Union in 1800 and numerous government committees and reports had warned that the practices of British landlords had Ireland poised for disaster, nothing was done. Then in 1845 the potato blight struck, which for the next seven years would destroy the staple of the Irish diet resulting in devastating famine. Irrespective of the Act of Union, parliament viewed this as an “Irish Problem” and the British Government would seek to minimize its responsibilities and costs. The same British landlords whose neglect had laid the foundation for this human tragedy would now be asked to pay taxes levied for each impoverished tenant. The reaction of these landlords was obvious and could be anticipated; in a strategy taken from Dickens’s character Scrooge, they would simply reduce the “surplus population.” It would be cheaper to send them to America than pay the poor tax.

In the 1840’s the United States passed stringent requirements for ships to ensure passenger safety. The result was that fares to New York and Boston had increased dramatically. It was far cheaper to send immigrants within the British Empire to Canada where regulations were much laxer. Many of the ships were lumber ships seeking to make a profit on what would otherwise be an empty ship on the return trip. Others were leaking hulks that were near a hundred years old and had once served as slavers. Temporary and flimsy decks, compartments and sanitary facilities that could not the first rough sea were installed. The “minimum” accommodation for passengers required by British law were shocking: an area six feet by six feet for four adults and all their provisions. Even these inadequate requirements could be skirted by ships carrying “Royal Mail”, carrying one sack of letters would allow a ship to offer even less space. Passengers were supposed to undergo a medical inspection before taking ship, given the number of immigrants and that inspectors were paid “by the head” the inspection was cursory at best.

The resulting calamity was inevitable. People weakened by hunger crowded in the cramp airless holds of ships with inadequate food, water and sanitary facilities became a breeding ground for disease, particularly typhus, which at the time was called “Famine Fever”. Upon arrival in Canada, passengers were required to disembark at the island of Gross Ile, an island in the St. Lawrence 48km downstream from Quebec, where a quarantine station had been established for immigrants to contain a cholera epidemic some ten years before. The three-mile long/ mile wide island had a normal capacity of 150 and was soon overwhelmed. At one point there were reportedly 40 ships stacked three kilometers deep with more 13,000 emigrants aboard. One ship reported 158 dead and 186 sick of 596, another 96 dead and 112 sick out of 399, still another 78 dead and 104 sick of 331. While waiting to disembark at Gosse Ile, the bodies of dead Immigrants continued to be dumped over the side of ships, soon choking the St. Lawrence.

It is estimates that over the course of The Hunger over 25,000 Irish immigrants died en route or shortly after arriving in Canada. The tragedy was not just confined to the Irish immigrants, 44 of the Canadian staff of Grosse Ile would themselves die of disease including 22 nurses and 4 Doctors. With the “efficiency” typical of the British Government of the famine period, directives were given that the processing of “healthy” immigrants was to be expedited, even though Doctors at Grosse Ile knew that they were infected and would soon become sick themselves. The result was a typhus epidemic throughout Quebec, claiming among many Canadians the Mayor of Montreal and the Roman Catholic Bishop of Toronto.

In 1909, the Ancient Order of Hibernians erected what is the largest Celtic Cross in the world on Grosse Ile. The AOH Cross stands vigil over 6,000 smaller crosses that mark the graves of the Irish Immigrants buried there on the island that local French Canadians had come to refer to Grosse Ile as “L’Ile des Irlandais”, “The Island of the Irish.” Sadly, this sacred place has been under attack from the forces of political correctness. In 1992, the Parks Commission of Canada announced plans to reshape the park as a monument to all 19th and 20th century immigrants “without too much emphasis on the tragic aspects of the history of Grosse-Ile” stating “(the events of 1847) have been overemphasized.” Apparently, the graves of over 6,000 of our forebears cannot protect our history, only we can.