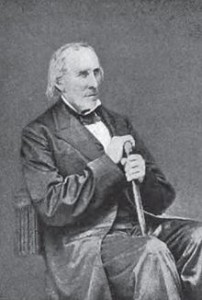 At this joyous time of year, our hearts arefilled with the thoughts of “Peace on Earth”and “Good Will to Men” that inspire us toacts of charity and kindness. However, ofhow many people can it be said that theymaintained in their hearts true “GoodWill to Men” when “Peace on Earth”was replaced by the insanity of war, evengoing so far as to “Love thy neighbor”irrespective of what uniform they werewearing? Such a unique individual was Fr.Peter Whelan.

Peter Whelan was born in 1802 in Loughnageer, County Wexford. Little is known of his early life prior to his attending Birchfield College in Kilkenny, where he received an education is the classics and mathematics before deciding to emigrate to America hearing God’s call in an appeal for priests to support the new Archdiocese of Charleston where he was ordained in 1830.

Over the next thirty years Fr. Whelan was a tireless shepherd of a flock which, as a result of the waves of Irish immigration caused by the Great Hunger, was growing exponentially. He helped build the first Catholic Church in Charlestown and also the first in Georgia. In 1854, Fr. Whelan was transferred to the newly formed Archdiocese of Savannah to minister to that city’s growing Irish Catholic population.  With only eleven priests, the archdiocese covered all of Georgia and Florida.

With the outbreak of the Civil War, the Confederacy established a garrison at Fort Pulaski located at the mouth of the Savannah River. Among the units assigned to the garrison where the Montgomery Rifles, which was almost to a man composed of Irish Catholic immigrants. Fr.Whelan quickly embraced the men of that remote and isolated outpost looking after both their spiritual and physical well being; he quickly became a favorite of the entire garrison. Fr. Whelan had the misfortune of being in Fort Pulaski when the Union forces isolated it and commenced a heavy shelling of the fort resulting in its surrender. While offered his liberty, like the good shepherd, Fr. Whelan would not abandon his flock and went into captivity with them as a prisoner of war and was transferred to Governor’s Island, New York.

Believing the war would be over in a few months,  neither side in the Civil War had given much thought to the capture and care of the large number of prisoners that were to result.  While at Governor’s Island Confederate officers were treated with a measure of professional courtesy by their Union counterparts,the enlisted men suffered terribly in improvised cells with scant rations and clothing. Fr. Whelan immediately began putting out appeals to his fellow priests and organized aid for his men. When Rev. William Quinn of St. Peter’s Parish became aware of Fr.Whelan’s confinement in the cold damp prison he feared for the aged priest’s health and launched a successful appeal to have Fr. Whelan paroled. However, except for occasional trips to the city to secure supplies, Fr. Whelan still insisted on staying with his men and sharing their privations while saying Mass and tending to the sick. The Confederate officers were impressed with Fr. Whelan’s ministrations to their men, and noting that the one suit of clothing he possessed was terribly threadbare, arranged the purchase of a new suit for the priest. A few days later, the senior officer noted that Fr. Whelan was still wearing his old clothes. Where was the new suit he asked? Fr. Whelan replied that he had given it to a newly arrived prisoner who had arrived almost naked. The Confederate officer attempted to reprimanded the priest saying he should have kept the new suit and given the man the old one. Fr. Whelan replied, “When I give for Christ’s sake, I give the best.”

Fr. Whelan and his men would eventually be exchanged for Union prisoners, and the priest would return to his civilian religious duties in Savannah. However, new and disturbing reports were soon received about a Confederate prison camp: Andersonville.  Prior to WW II, no prison camp was more infamous. Hastily built for 6,000, it would hold 45,000 Union POWs with no shelter, sanitation or clean water. It was literally a hell on earth for Union Prisoners and a place where 13,000 of them would die. Aware that many of the Union prisoners were likely to be Irish Catholics, and despite himself having been confined in the North as a Confederate POW, Fr. Whelan volunteered to go to the prison and tend to the men’s needs. Those needs were staggering with scores dying every day from starvation and disease. Several fellow priests attempted to assist Fr. Whelan, but none could stand the physical and emotional strain and each left within a few weeks. Yet, 62 year old Fr. Whelan stayed and his impact was noted in later years by surviving prisoners:

“By coming here he exposed himself to great danger of infection…His services were sought by all, for, in his kind and sympathizing looks, his meek but earnest appearance, the despairing prisoners read that all humanity had not forsaken mankind.”

“Of all the ministers in Georgia accessible to Andersonville, only one could hear this sentence, ‘I was sick and in prison and you visited me,’ and that one is a Catholic.”

Fr. Whelan’s selfless sacrifice came with a price; he soon contracted ‘Congestion of the Lungs’, likely tuberculosis. With Georgia falling to the advancing forces of Union General Sherman, the Andersonville prisoners were transferred and Fr. Whelan would have to leave them. However, before they left he arranged a loan of $400 in gold to buy flour and have it baked into hundreds of loaves that became known to the prisoners as “Whelan’s bread”; it provided the men with rations for several months. One former prisoner later wrote, “Without a doubt (Fr. Whelan) was the means of saving hundreds of lives.”

After the war, his health permanently broken from his service to his fellow man, Fr. Whelan petitioned Union Secretary of War Stanton for the $400 that Fr. Whelan had borrowed so that the Union Prisoners could be fed. In an unmitigated display of callousness, ignoring the living evidence of hundreds of soldiers who had survived because of “Whelan bread,” Stanton asked the aged priest to provided receipts! Outraged, Fr. Whelan informed the callous Stanton to keep his money because he had, “Neither the health nor the strength to run over Georgia to hunt up vouchers and bills of purchase.” Instead the proud priest made one further sacrifice. Knowing of his ill health, friends of Fr. Whelan had raised funds to send the priest to a better climate where he might recover. Instead of using the funds to aid in recovering his health, Fr. Whelan used the money to repay the loan. After several years of ill health, Fr. Whelan died in 1872. His was the largest funeral that Savannah had ever seen.

While Fr. Whelan is little remembered today, let us at this joyous time of year remember and be inspired by an Irish American who was the embodiment of the true meaning of Christmas in giving of himself to the betterment of others.