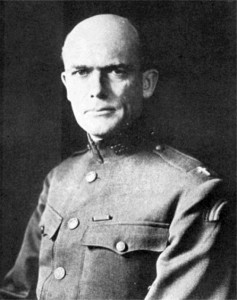 Recently, over a million spectators converged on Times Square to watch the annual ball drop bringing in the new year.As the large milling crowds were looking up, one wonders how many of them noticed a statue of a man wearing the uniform of an American soldier of a century ago, a Celtic cross at his back, watching over them. Yet the man depicted is not armed with a rifle, but with a bible. One wonders if the countless tourists even paused to look at the inscription and the tribute to an incredible man who holds the distinction of being the most decorated Chaplin in the history of the United States: Fr. Francis P. Duffy.

Fr. Duffy was an immigrant to America,not from Ireland, but from Canada where he was born in Cobourg, Ontario. He was the grandson of Irish grandparents who had fled to the New World to escape the horrors of the Great Hunger in Ireland, his father’s family coming from Carrickmacross in County Monaghan, his mother’s family from Roscommon. He was the third of eleven children, and in what would turn out to bean irony of his later reputation for seemingly limitless energy, was described as “frail and not of robust health”. Yet, he possessed a quick mind, a family friend describing how as a small child he often “startled his mother” with his precociousness.

The young Francis excelled at his studies, becoming an instructor at St. Francis Xavier College in Manhattan before heeding the call to the priesthood. He was ordained in 1896, and said one of his first masses here in Rockland County at St. Peter’s in Haverstraw where he was assisted by a young altar boy, Michael A. Donaldson. Duffy went on to attend Catholic University where he would eventually earn his Doctorate.In 1898, he volunteered as a Chaplin to minister to soldiers returning from the Spanish American War, many of whom had contracted malaria and yellow fever. After a month of tirelessly administering to these soldiers it was not long before Duffy himself contracted typhoid and was taken back to Dunwoodie in Yonkers, NY to recuperate. After recovering, Fr. Duffy spent the next decade as a popular and influential instructor at Dunwoodie, until his more modern and independent views ran afoul of some in the Church Hierarchy. He was transferred to Our Savior Church in the Bronx. Little more than a storefront next to a vacant lot with few parishioners when he arrived,Duffy single handedly built it into a thriving parish with a new Church and school. Still showing his progressive streak, Duffy even originated the idea of establishing a daycare center in the parish so that mothers could attend mass.

Yet the quiet life of a parish priest was too calm for the energetic Duffy and in addition to his pastoral duties he also served as the Chaplin of the predominantly Irish American 69th Regiment of the NY National Guard, “The Fighting 69th”. When World War I broke out, Duffy was quick to join his boys when they were among the first units to be mobilized for France. Duffy’s sincere concern for the men of the 69th, his boundless good will and energy in ministering to their needs, and his zeal for guarding the unit’s Irish traditions soon made him a favorite among the men and officers. It was often reported that the line for Fr. Duffy’s confessions often exceeded the chow line. Fr. Duffy was not a passive witness to war, he invariably accompanied stretcher parties under fire into “No Man’s Land” to bring comfort to the wounded and dying. For his courage in ministering to his men under fire, Fr. Duffy would be awarded the Distinguished Service Cross, the Distinguished Service Medal, service, the Legion d’honneur and Croix de Guerre . Despite his calmness and resolution under fire, even Duffy could not escape the horrors of the Western Front unscathed: witnesses recall that in turning over one young soldier to give the last rites, Duffy broke down into tears; he remembered baptizing him as a baby.

Recognized as a natural leader and the heart and soul of perhaps the hardest fighting regiment of WWI, Duffy was briefly considered to be appointed its commanding officer, which would have been unprecedented as a Chaplain. Fr. Duffy though had other plans. He saw in the heavily Irish Catholic 69th a living example of Irish Catholic patriotism, patriotism which was still far too often questioned back home by the forces of ignorance and prejudice. Duffy used his influence to see that the 69th finished the war and marched back to New York under another shining example of Irish American Patriotism in action: Colonel “Wild Bill” Donovan.

Duffy returned to New York the most decorated Chaplain in the history of the United States. Duffy was appointed pastor of Holy Cross Church in Hell’s Kitchen, a block from Times Square where he quickly became a great favorite of the neighborhood and the theater community alike. Fr. Duffy was not through fighting however. In1927 Al Smith was the first Catholic to run for the office of President of the United States. Despite the tremendous sacrifices that Catholics had made in defense of their country, their patriotism was still called into question. In response to an article published in Atlantic Monthly questioning whether a Catholic could serve as a loyal president, Duffy as a “ghost writer” for Smith, made a classic statement on Catholic patriotism. The ideas put forth by Fr. Duffy on religious freedom and freedom of conscience would influence the the Second Vatican Council’s Declaration on Religious Freedom some thirty years later.

Duffy also fulfilled a vow he had made to finish a book that had been started by one of his companions in the 69th,the famous poet Joyce Kilmer, who had not survived the war as a permanent testament to him and all the brave men of the 69th. The book was later titled “Fr. Duffy’s Story.” In its preface Duffy summed up his character perfectly, “I am a very Irish, very Catholic, very American person, if anybody challenges my convictions. But normally, and let alone, I am just plain human.”

Fr. Francis P. Duffy died on June 27, 1932. An estimated 25,000 people of all walks of life attended Fr. Duffy’s funeral at St.Patrick’s Cathedral. Trying to squeeze her way past a barricade for a better view, a woman was stopped by a police officer. She protested, claiming to be “a friend of the deceased.” The officer replied “That is true Ma’am of everyone here today.” What an epitaph to a great man. Let us, this New Year, resolve never to forget Fr. Duffy or the countless Irish Americans like him.