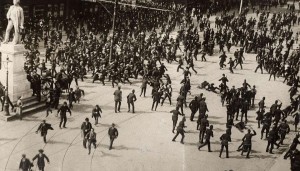 That any country should have in its history an event known by the sorrowful name of “Bloody Sunday” is tragic.  That a country should have in the space of 59 years, less than an average lifetime,  three events called “Bloody Sunday” is truly horrific.  Yet, in each of these adversities the strength and resiliency of the Irish people has been proven.  The third and best known “Bloody Sunday” was when members of the British Parachute Regiment opened fire on unarmed protestors in the streets of Derry in 1972.  The second was on November 21, 1920 when, in response to the killing of key members of the British Intelligence apparatus by Michael Collins’ “Squad”, members of the “Black and Tans” and “Auxies” vented their frustration and fury on the innocent civilians at Croke Park who had been peacefully watching a football match.  However, the first sad day to bear the epithet “Bloody Sunday” in the twentieth century was August 31, 1913 in the streets of Dublin.

The origins of the first “Bloody Sunday” can be traced to a test of wills between two Irish men and the struggle for workers’ rights that was being played on the world stage in the early years of the twentieth century.  The labor struggle was late to arrive in Ireland, Long used as a source of agrarian produce and farm rents by English landlords, there had been little capital investment and industrialization.  What trade unions that did exist catered to skilled craftsmen who belonged to organizations based in Britain and with a Britain centered focus.  The plight of unskilled workers, particularly in Dublin, was both deplorable and ignored.   It is estimated that three quarters of the workforce of Dublin was unskilled.  With twenty percent of that workforce being unemployed, it was possible for employers to pay desperate workers less than half the wage that similar work would earn in London.  Families in the Irish capital often made their homes in one room apartments with no privacy in decaying tenements. Disease and high death rates were common.

It was these conditions that brought James Larkin to Ireland in 1907.  Born the son of impoverished Irish immigrants in the slums of Liverpool, Larkin had left school at the age of fourteen upon the death of his father to work on the Liverpool docks.  A commanding presence at over six feet in height and a gifted public speaker, “Big Jim” had been a successful labor organizer for the British based National Union of Dock Labourers (NUDL) in England, Scotland and Ireland.  Larkin had perfected the tactic of the “sympathetic strike”, where workers not directly connected to the current labor dispute would walk out in “sympathy”, magnifying the strikes impact and the pressure brought to bear on employers.     In Belfast, Larkin’s charisma was such that he was able to organize both Protestant and Catholic workers in that divided city in common cause, with carters, coal men and even the local Royal Irish Constabulary joining his strikes at one point.   However, his more revolutionary views caused him to be expelled from the NUDL.  Undeterred, “Big Jim” moved south to Dublin where he formed and founded his own union: the Irish Transport and General Workers’ Union (ITGWU) in 1908 which in three years became Ireland’s largest Union with 10,000 members.  Seeking not only to improve their working conditions but also to restore their self-respect, Larkin’s ITWGU supported policies that promoted justice and encouraged cultural and social achievement.  However Larkin’s main aim was to unionize the city’s unskilled workers; he coined the slogan “A fair day’s work for a fair day’s pay’.

After a few smaller successful industrial actions, Larkin set his sights on bigger achievements; his target was the Dublin United Tramway Company, owned by William Martin Murphy.  Murphy was one of the largest and wealthiest employers in the city; besides the Tramway he owned hotels and newspapers.  He shared Larkin’s humble beginnings and he too at an early age had to quit school to support his family.  He was the model of a “self-made man” who put to lie stereotypes that the Irish had no head for business.  While no means extravagant on wages, before the strike he appeared to enjoy a positive reputation as a fair and just employer who was often thought “too liberal” amongst the other employers in the city.  However, under a soft spoken, well-mannered exterior was a will of steel and the all too often evident self-made man’s contempt for anyone who didn’t appear capable of doing what he had done.  Dublin would now be caught between the irresistible force of Larkin and the immoveable object of Murphy.

On 26 August 1913 Larkin called for a strike against Murphy’s trams, timing his strike to occur during the Royal Dublin Society’s Dublin Horse Show, so as to maximize the strike’s impact.   Murphy, adopting Larkin’s “sympathy tactics” quickly arranged for 400 of Dublin’s employers to combine to lock out any employee who was a member of the ITGWU, and thus this strike entered history as “The Dublin Lockout”.  Events quickly began to spiral out of control. Employers started importing replacement labor from Britain; striking workers engaged in intimidation, often physical, of these ‘scabs’ and anyone who opposed the strike. The government agents of the Crown, as could be expected, supported the employers and quickly arrested Larkin on charges of sedition and conspiracy. Larkin’s strike had till now received lukewarm support from the general public, but the arrest of Larkin and suppression of free speech galvanized the broader community in support, not the first time the Crown would overplay their hand.   While on bail, Larkin was advertised as the featured speaker at a rally at Sackville (now O’Connell) Street for August 31st. Authorities, working from Dublin Castle, immediately issued an order banning the meeting and Larkin’s speech. Larkin, addressing a crowd of supporters at his union headquarters at the ITGWU’s Liberty Hall, promised to speak at the appointed place and time. He then proceeded to publicly burn the banning order, setting the stage for the next day’s violence.

On August 31st, Sackville Street was packed with strikers and the simply curious who wanted to see if Larkin would indeed defy the order. Suddenly, on a balcony of the Imperial Hotel overlooking the street, a bearded man appeared. It was Larkin in disguise, and when he ripped the beard off and began to speak, the crowd went wild with cheering. No doubt incensed that Larkin had made a fool of them, the Dublin Metropolitan Police quickly arrested him and charged the assembled crowd with batons. Two men were killed and hundreds were injured and taken to hospital.  Thus the first “Bloody Sunday’ of Irelands turbulent 20th century entered into history

The Dublin employers were to eventually break the strike in early 1914, largely because British Union members would fail to strike in support their Irish colleagues, but not before the people of Dublin endured months of suffering. Defeated, Larkin would soon depart for America. However, the violence of Bloody Sunday would have telling effects for the future.  It engendered a belief among many that only the people of Ireland could improve the condition of Ireland.  The heavy handed tactics of the Crown on Bloody Sunday left an irreconcilable rift between crown authority and the people of Dublin.  The violence of Bloody Sunday 1913  inspired one of Larkin’s colleagues in the  ITGWU to arm and organize security to protect future  strikers and their rights of free speech and assembly from similar violence. That man was James Connolly, and his Irish Citizen Army would march with Pearse and his volunteers to free Ireland in 1916. But that is another story.…