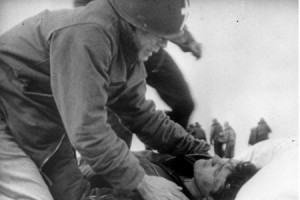 The Medal of Honor is the highest military honor bestowed by the United States. It is awarded for “conspicuous gallantry and intrepidity at the risk of his or her life above and beyond the call of duty while engaged in an action against an enemy of the United States.”   To achieve this honor in battle is exceptional enough, to earn this award when armed only with one’s courage and faith is extraordinary.   One such extraordinary man was Fr. Joseph T. O’ Callahan, S.J .

Joseph Timothy O’Callahan was born on May 14, 1905 in Roxbury, Mass.  In 1922, young Joseph heard God’s call and joined the Society of Jesus, the Jesuits, as a novitiate to begin thirteen years of study prior to ordination.  O’Callahan earned degrees in mathematics and physics in addition to religious philosophy and was ordained in 1934.   He became a Professor of Mathematics, Philosophy, and Physics at Boston College and quickly rose to the position of the Director of the Mathematics Department at the College of the Holy Cross.  In August 1940, as it became clear that America was drifting towards war, Fr. O’Callahan heard a second call to service and joined the Naval Reserve Chaplin Corps.   Already well past the standard service age, scholarly Fr. O’Callahan’s decision to put his promising academic career on hold to join the Navy shocked his colleagues.   Quipped one “Let someone younger help those boys. You can’t even open your umbrella.”

Fr. O’Callahan severed in several assignments before reporting for duty on the carrier U.S.S. Franklin as chaplain to its compliment of 3,200 men.   The Franklin was part of Task Force 58 whose mission was to seek out and destroy what remained of the Japanese fleet as they approached Japan.   On the morning of March 19, 1945 the Franklin was positioned fifty miles off the coast of Kobe, Japan and had already launched one wave of aircraft and was preparing to launch a second when a lone Japanese bomber on a suicide mission was able to penetrate the fleet’s defenses.   The bomber was able to drop two bombs on the Franklin whose flight deck was covered with fully fueled aircraft and munitions.   Within seconds the ship was transformed into an inferno.

Armed only with his helmet that bore a white cross and holy oil, Fr. O’Callahan went forward to take on man’s greatest enemy; fear.   He came to a ladder leading to the flight deck to find it mobbed by frightened young men struggling to escape. In a calm voice he called “Here boys, single file.”   Finally emerging himself on the flight deck he was confronted with a scene beyond man’s worse imaginings of hell: blazing aviation fuel and choking smoke everywhere, the air filled with the cries of the wounded and the dying and the ship rocked by continuous explosions from bombs and rockets that were on deck to load on the Franklin’s aircraft.

Fr. O’Callahan immediately noticed that flames where surrounding a gun turret filled with ammunition, the heat of the fires threatening to detonate the ammunition at any time.   He quickly organized a party of men into a line as he himself entered the scorching turret.   Calmly, Fr. O’ Callahan handed the shells out where they were passed down the line and over the side.   Fr. O’Callahan seemed to be everywhere at once, organizing fire crews to save the ship while still ministering in his priestly duties to the wounded and dying.   The Franklin’s Captain Les Gehres, himself fighting to save his ship which was now listing badly, watched in helpless horror from the bridge as he saw a 500 lb. bomb break loose on the deck and begin to roll toward an open hold filled with ammunition.   A group of sailors instinctively stopped the bombs’ roll, but then froze at the prospect of now having to defuse the live bomb.   Captain Gehres then saw Fr. O’ Callahan appear out of nowhere and calmly stand over the bomb, inspiring and encouraging the men by his coolness as they successfully defused the bomb. Captain Gehres later described O’Callahan as “the bravest man I have ever seen.”

Fr. O’Callahan was not the only hero of that day, but his unflappable demeanor was an inspiration and an example to all who saw him.   The crew of the Franklin refused to give up on her.   The Franklin well earned the title that a movie based on the events of that day would bestow upon her: The Ship that Wouldn’t Die.  Despite 724 men killed and 265 injured and listing 13 degrees, the Franklin made it back to Pearl Harbor and eventually home to the United States.

Fr. O’Callahan became the first Navy Chaplin to be awarded the Medal of Honor.  His was not the fierce courage of the warrior, but the stoic, confident courage born of faith in a greater and selfless purpose.   At a time when our faith is increasingly under attack by a secular, self-centered culture, may Fr, O’Callahan’s selfless example inspire us as much as he did the men of the Franklin.

Irish American Members of the Catholic Clergy have a long and distinguished record of service in defense of their country: