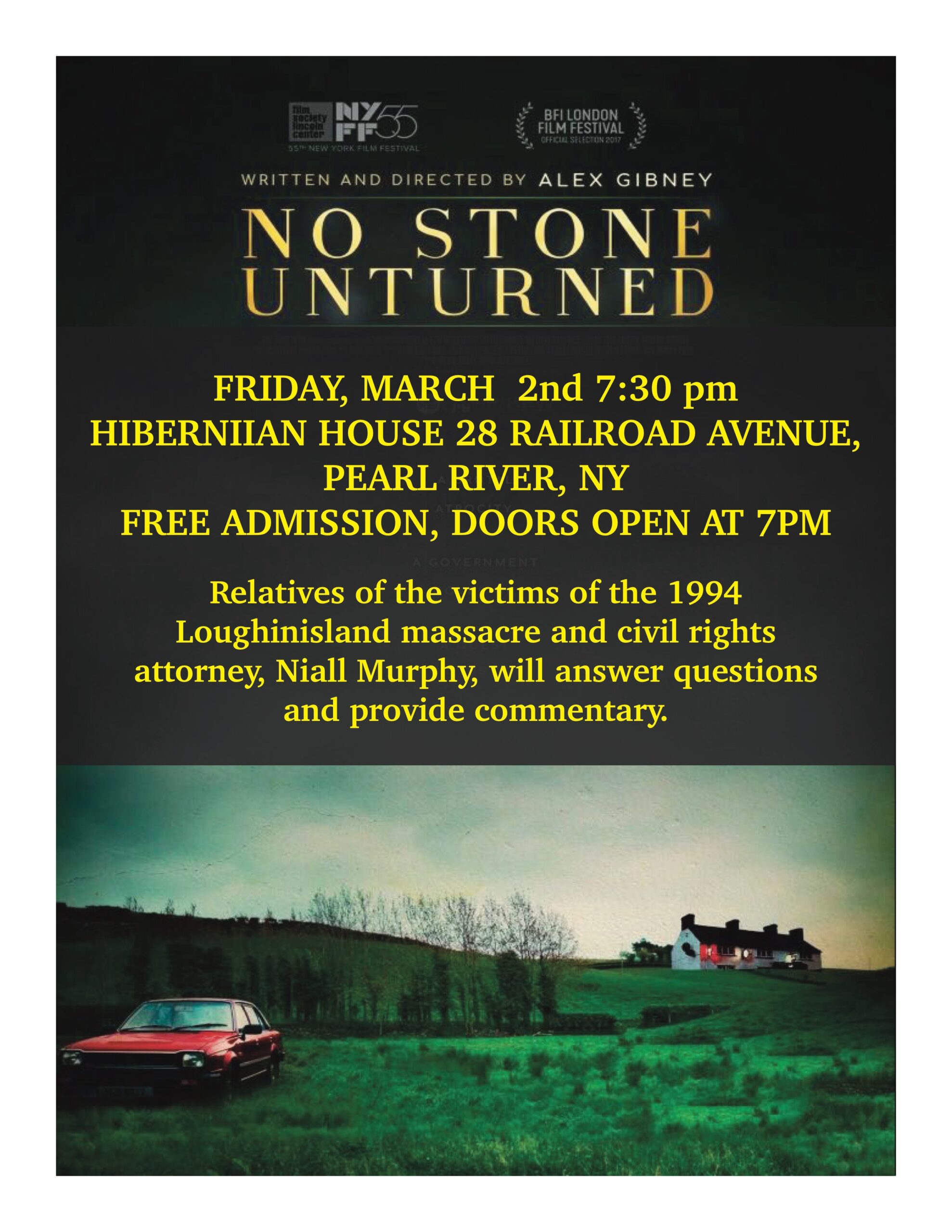 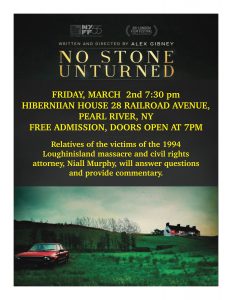 Due to circumstances beyond our control, we regret to inform you that we must cancel our presentation of the documentary tonight.  Due to the “Beast From the East” storm pummeling Ireland, our guests speakers had their flight canceled from Ireland and our own Noreaster is making travel conditions difficult.
We apologize one again.

Division 3 will host a showing of the award winning documentary “No Stone Unturned”. We are honored to have relatives of the victims of the massacre with us to present the film, answer questions, and provide commentary. Please see a description below as well as the bios of our guests. Please click on this link for an excellent review that also contains a link to the trailer: https://www.theguardian.com/film/2017/nov/03/why-was-there-a-cover-up-film-maker-alex-gibney-on-a-case-of-cold-killing-in-county-down?CMP=Share_iOSApp_Other .
Admission is free and all are welcom. We hope you can join us.

Investigative documentary filmmaker Alex Gibney—best known for 2008’s Oscar-winning Taxi to the Dark Side, Enron: The Smartest Guys in the Room, and at least a dozen others—turns his sights on the 1994 Loughinisland massacre, a cold case that remains an open wound in the Irish peace process. The families of the victims—who were murdered while watching the World Cup in their local pub—were promised justice, but 20 years later they still didn’t know who killed their loved ones. Gibney uncovers a web of secrecy, lies, and corruption that so often results when the powerful insist they are acting for the greater good.

Life long campaigner for Loughinisland Justice Group. Emma was 8 years old when her father Adrian was murdered at the Heights Bar Loughinisland, and was 18 when the families gathered to campaign for Truth and Justice on the 10th Anniversary of the atrocity. Emma is now 30 years old and was co-opted in June 2017 as the MLA for South Down, representing Sinn Féin.

Emma’s mother and widow of Adrian. Clare has campaigned tirelessly in respect of her husbands murder, always believing that the State had covered up terrible crimes to prioritise their intelligence agenda. Clare has made presentations to Parliaments in Stormont, Dáil Éireann, Westminster, Brussels, Strasbourg and Washington DC and is a predominant narrator in the film No Stone Unturned.

Niall is a partner at KRW Law LLP, a leading human rights practice, based in Belfast. The practice is instructed by a significant number of clients engaged in legacy litigation relating to conflict related deaths and injuries, appearing for those bereaved as a result of atrocities such as Loughinisland, Loughgall, Claudy, Clonoe, Kingsmill, the Dublin-Monaghan and McGurks Bar Bombings, the Glenanne Gang series of killings, Ormeau Road Bookmakers, the 1974 Birmingham Pub Bombing amongst others. Niall is instructed on behalf of several families to act at the reopening of the ‘John Stalker / Shoot to Kill’ Inquests, relating to the murders of 6 unarmed men in 1982 by the RUC.
Niall is a Director of Belfast based NGO, Relatives for Justice and has made representations at the European Parliament in Brussels, to the EU Human Rights Commissioner in Strasbourg and also to the UN Human Rights Committee in Geneva as well as having presented lectures to Universities in Washington, Pittsburgh, Jersey City, Fordham University New York and Harvard, Massachusetts .
Niall is a director of Brassneck Theatre Company, a Panel Member of the Human Rights Fund, an Honorary Chair of the Belfast International Homecoming and also sits on the Antrim GAA Human Resources Board. Niall is vice chairman of St Enda’s GAC and a founder and Governor of Gaelscoil Éanna.