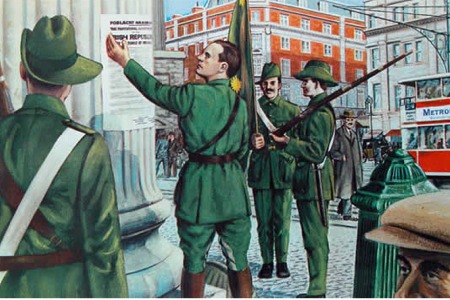 In preparation for the centenary of the Easter Rising, The Men and Ladies of the Ancient Order of Hibernians are pleased to host a history discussion by Dr. Ruan O’Donnell with special guest Mary Holt Moore on  Tuesday September 30th at 7:00 pm at Hibernian House. 28 Railroad Avenue Pearl River.  All are invited and Admission is free.

Dr. Ruan O’Donnell will present ‘The strategy and politics of the 1916 Rising’. This talk will address the origins of the historic uprising at Easter 1916 when the Irish Volunteers and Irish Citizen Army attempted to end centuries of British imperialism in Ireland. Account will be taken of the military planning and crucial American dimension in the context of the First World War.

Dr. O’Donnell is a Senior Lecturer in History at the University of Limerick. A former Visiting Chair of Irish Studies at the Keugh-Naughton Institute, Notre Dame (2010-11), he is the author of numerous publications on the history of Irish republicanism including ‘Special Category, The IRA in English Prisons, 1968-1978′. O’Donnell is the founding co-general editor of the acclaimed ’16 Lives’ series in which new biographies of all those executed for engagement in the 1916 Rising are being published by O’Brien Press. He is a member of the all-Ireland Universities Ireland Decade of Centenaries Committee, National Union of Journalists and the Irish Manuscripts Commission. Volume Two of ‘Special Category’ covering the period 1978-1985 will be published in spring 2015 followed by O’Donnell’s biography of Patrick Pearse. .