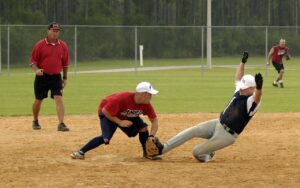 Week 3This weekend the boys of summer faced off against big hitting Flemings but today turned out to be more about pitching.  Pat Troy took the mound and pitched 8 strong innings letting up only 3 runs going into the bottom of the 8th.  Flemings scored 2 runs with 2 outs and that proved to be the difference in the game.  Doug Aday’s RBI triple was not enough to get it done in the 9th and this is the team’s first loss dropping them to 2nd place in the standings.  The team will be back in action on Father’s Day vs. the Horse and Jockey.at Miller S chool.

Week 4: The afternoon league (3-1) moved back into first place with a 9-4 victory over last year’s runner up, Horse & Jockey.  Once again it was a new face playing the catalyst, as Mike McGrath filled in at 3rd for Jimmy ‘wally pipp’ Spinks; playing a stellar hot corner and driving in multiple runs to lead the team to victory.  Rumor on the street is Tommy Mai has done such a nice job in the offseason with free agent signings that Brian Cashman is now officially on the hot seat.  Congrats boys!