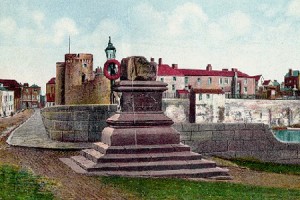 In the city of Limerick, near King John’s Castle, stands an unusual monument. Mounted on a pedestal is a block of stone as nondescript and humble as its original origins as a mounting block used by people to get on their horse. Yet, this single simple stone represents one of the most honorable moments in Irish history and one of the most shameful and deceitful in English: the Treaty of Limerick.

In 1688, James the II of the house of Stuart, proclaimed king of England, Scotland and Ireland, was overthrown when the English Parliament with the support of the military invited William of Orange, Stadtholder of Holland and son-in-law to James, to take the throne in what was in effect a coupe. The reason for deposing James, who had converted to Catholicism, was the toleration his rule was beginning to extend to Catholics in his realm and the recent birth of a son raising the fear of a Catholic dynasty (James’ previous two children from an earlier marriage Mary, the wife of William of Orange, and Ann were both Protestant but their claims to the throne under English law would be secondary to any male heir). James fled England to France where he could count on support from King Louise XIV who was already at war with William on the continent. While James’ policies of religious toleration had alienated protestant England, he still enjoyed great support with the Catholics of Ireland. With a body of French troops and loyal followers, James landed at Kinsale on 12 March 1689 in a quest to regain his throne, beginning what is now known as the Williamite War in Ireland. Based on the Latin for James, James’ army and followers have come down to history as the Jacobites.

Among James’ followers was a young Irish Officer, Patrick Sarsfield. The grandson of Rory O’Moore, the leader of the 1641 Rebellion, he had been educated at a military school in France and was already famous for his courage, sense of honor and generosity. As Lt. Colonel he commanded the King’s Lifeguard Cavalry, a position well suited to his daring and dash.

James II quickly showed himself a failure as a military leader, lacking the qualities that Sarsfield possessed in abundance. James II was one town short of securing all of Ireland, when the Protestant inhabitants of Derry locked it’s gates and thus forced a siege. The defeat of another of James’ commanders Justin McCarthy at the Battle of Newtownbutler and the landing by William of a strong English force prompted James to retreat, losing his best chance to win Ireland. This set up the pivotal confrontation of the Battle of the Boyne. With the result of the battle still in doubt, James lost his nerve. In the same breath as he cursed the “cowardly Irish” it was James himself who first fled the battlefield and ultimately Ireland to the everlasting scorn of the Irish. Only the courage of Sarsfield and his cavalry saved the Irish as he fought a courageous delaying action allowing the Irish Jacobite army to escape the field.

The Irish forces retreated behind the walls of the city of Limerick. William of Orange in his over confidence made a major blunder. Anxious to finish off the Irish, William pushed his infantry and cavalry relentlessly leaving his slower moving artillery and supply train struggling to keep up. A large gap had formed between the artillery/ supply train and the rest of William’s army. Realizing this, Sarsfield did the unexpected: he attacked. Sarsfield’s cavalry captured or destroyed all of William’s artillery and enough supplies to equip a new Irish regiment. Without artillery, William could not hope to dislodge the Irish from Limerick. Perhaps sensing that his reputation had nothing further to gain, and perhaps quite a bit to lose, in facing Sarsfield, William returned to England turning command over to one of his trusted Dutch Generals, Baron van Ginkell.

In the following year of 1691, the Jacobite forces were now under the command of the Marquis de St Ruth appointed by their French allies. Perhaps jealous of Sarsfield’s reputation, St. Ruth held Sarsfield and his cavalry back at the fateful battle of Aughrim, where Ginkell inflicted a devastating defeat and de St Ruth was killed. Once again, only the action of Sarsfield and a heroic rearguard action prevented the annihilation of the Irish Jacobite forces and once again they retreated to the fastness of Limerick.

Sarsfield knew that Ginkel was too experienced a general to repeat the mistakes of William of Orange and that the cause of the Irish Jacobites was unsustainable. Sarsfield opened negotiations with Ginkell. The terms Baron van Ginckel negotiated reflected the respect that Sarsfield’s army was held in by his foe. Sarsfield and his men were to be allowed to march out of the city under arms, retaining their flags, and all that wished would be transported to the continent to join the Armies of France at England’s expense. In addition, Irish Catholics in Ireland were promised protection of their civil liberties and religious freedom. To spare further suffering, Sarsfield agreed to these terms, signing the treaty at the Treaty Stone on 3 October 1691.

Ironically, shortly after the Treaty of Limerick was signed a long promised French relief force was sighted. Many of Sarsfield’s followers urged him to tear up the treaty and resume the fight with these fresh forces. However, Sarsfield would not break his oath nor the treaty and he and his forces sailed to France never to return to the Ireland they loved. The English did not act so honorably. With Sarsfield, his army and the threat or armed resistance gone, the English parliament rejected the treaty negotiated in their King’s name. Instead of granting equality and the civil protections promised to Catholics in the treaty, they enacted Penal Laws designed to reduce the Irish people to mere serfs in their own land. It is claimed by some that William of Orange was “distressed”” by the rejection of the treaty but William failed in his responsibilities as a King to his subjects and as a man of honor to ensure that a treaty negotiated in his name was honored.

Every July Orangemen, taking their name from William of Orange, remember their victories at Derry and the Boyne with parades. It is a shame that their memories of these events are selective and incomplete. The lack of moral courage by the King they idolize to honor his word and the subsequent blind eye he turned to repression condemned Ireland and all her people to hundreds of years of sectarian strife. Until their memory of history is complete, until the spirit of the Treaty off Limerick is permanently and fully enacted, then may we hold to the phrase “Cuimhnígí ar Luimneach agus ar fheall na Sasanach”; Remember Limerick and Saxon Perfidy.