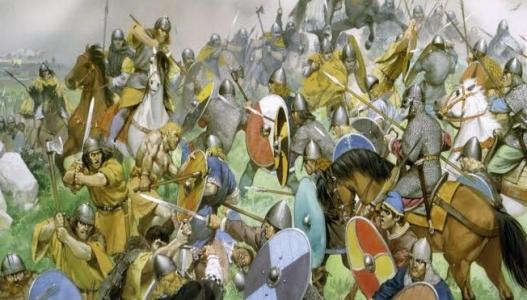 While the rest of Europe plunged into darkness with die fall of the Roman Empire, the light of learning and western civilization was kept flickering in Ireland, preserved in the monasteries established by the followers of St. Patrick. However, it would only be a matter of time before the “light” attracted the unwanted attention of those more interested in plunder than learning. A period of warming weather and a population explosion in what we now know as Scandinavia combined to unleash upon Europe a terror the likes of which had never been seen before: the Vikings.

In 795, the Viking attacks on Ireland began with the sacking and burning of a monastery on Rathlin Island. Hit and run raids along the Irish coast would continue for the next forty

years. The Viking tactics changed however in 837; sixty Viking longboats appeared in die river Boyne while anoher sixty appeared in the river Liffy and began to raid inland and plunder the great monasteries such as Clonamacnois. In the winter of 841-842 the Vikings wintered in Ireland at a defensive position they had established: Dublin. The Vikings were now no longer raiders, they were occupiers and colonists. The Vikings began building fortified towns, longphorts, near the sea which was the source of their strength. These Norse settlements would be the basis for the future Dublin, Wexford, Waterford, Cork, Wicklow, Limerick and Stangford. The drawback to these settlements for the Vikings is that they provided fixed targets for the Irish to attack. The result was the establishment of a chaotic and often violent status quo, with Viking Jarl and Irish Chieftain making alliances and breaking alliances as part of ongoing power struggles in both communities.

It was into this turbulent world, in the middle of the 10th century, that Brian Boru was born. One of die contributing factors to the success of the Viking invasion was that the Ireland of that time was made up of dozens of small kingdoms and competing kings and chieftains. Brian was the younger son of Cennedi, the King of the Dal Cais of north Munster. (“Boru” meaning “of the tributes”, a term indicating a great lord, was a tide given after his death.) The Dal Cais had recently risen in power due to the strategic position of their lands straddling the river Shannon, which combined with knowledge gained from Norse tactics allowed them to become a formidable military force. Brian’s older brother, Mathgamain, succeeded to the kingship of Munster and successfully captured and sacked the Viking settlement of Limerick. Mathgamain success was short lived, he was betrayed by supposed allies and murdered. Brian avenged his brother’s death and assumed the throne of Munster.

For the next twenty years Brian would increase his power with a vision of becoming Ard Ri, “High King” of Ireland. The title of Ard Ri was an ancient one, that had long been held by the O’Neill’s of Ulster, but it was more honor than substance, with the minor kings giving or withholding support as suited them. This was to change with Brian. In 999 Brian captured Dublin, the last of the Viking cities yet to fall under his control. Brian became High King in name and fact with the submission of the then current High King, Malachy the II, in 1002.

The next decade of Brian’s reign was a period of relative peace and prosperity in Ireland. Under Brian’s protection, the plundered monasteries were rebuilt. It is said that Brian sent emissaries abroad in an attempt to acquire and return treasures and artifacts that had been taken from Ireland. Relative peace and stability gave rise to a new golden age of Irish culture.

However, such a Golden Age would not last long. In an attempt to consolidate his power through reconciliation, Brian had allowed Sitric, the Viking King of Dublin, and Mael Mordha King of Leinster to retain their positions after swearing loyalty to Brian. Combining forces along with Viking allies that had been recruited by Sitric from the Orkney Islands, they decided to challenge Brian at Clontarf, located outside of what was then Dublin, on Good Friday April 23, 1014. What resulted was one of the largest and bloodiest battles of the Dark Ages. The battle swayed back and forth throughout the day when finally Brian’s forces gained the advantage. The result was a slaughter; Sitric and Mael Mordha killed and many of the Orkeny Vikings drowning as they attempted to flee in panic to their Longships as the tide was coming in. However, in winning the battle the Irish had also lost: Brian’s son and grandson were both killed in the battle. Legend says that Brian, now an old man in his seventies, was killed by a fleeing Viking who found the old man at prayer for his lost son, grandson and in honor of Good Friday. Without Brian’s strong leadership, Ireland rapidly reverted to the disjoint and feuding kingdoms that had preceded Brian’s reign. It was such a fractured Ireland that the Normans under Strongbow invaded 55 years later and conquered; one wonders what might have been the result if Brian Boru’s united Ireland had persisted.

Legend says that Brian Boru drove the Vikings out of Ireland. Brian’s victory at Clontarf marked the last time the Vikings would attempt a major landing in Ireland, but the Norse of the longphort’s had been in Ireland for generations and had become, and would continue to be, an integral part of Irish Society. It would be equally wrong to view die end of Brian’s High Kingship at Qontarf as a hollow victory that brought to an end Brian’s vision of a unified Ireland on that Good Friday 1014. It was memories of the Golden Age of Brian’s reign that would keep alive the vision of Ireland’s nationhood in the face of conquest and oppression; that would inspire the volunteers who rose in Dublin on Easter Monday 1916, not far from where Brian had asserted Irelands right to independence 900 years before, and set Ireland once more on the path of independence and unity. On another Good Friday, 984 years later, 10 April 1998, the light of die promise of a free, peaceful and united Ireland was lit again with the Good Friday agreements. Despite the winds of politicians and voices of division that light continues to flicker we as Hibernians and Irish Americans must nourish and protect tiiat small flame of freedom until all of Ireland is illuminated by it as it was in the time of Brian Boru. Let us on this the Millennial anniversary of Clontarf rededicate ourselves to die United Ireland of Brian Boru.