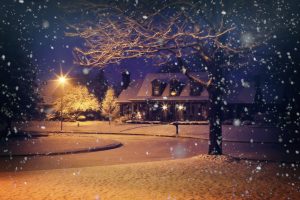 We have all seen the beautiful tradition of placing candles in the windows at Christmas time. This tradition of placing candles in the windows of homes during the Christmas season was brought to America by Irish immigrants in the 19th century. However, beyond mere decoration as Irish Americans these Christmas candles have a special significance. They reflect the fortitude and conviction of our Irish forebears to maintain the light of their faith through a dark and oppressive time.

Starting in the reign of the Tudors and continuing through the early part of the 19th century, it was a crime to be a Catholic in the British realm and specifically in her colony of Ireland. A series of laws, know to history as the Penal law, sought to reduce the Irish people to ignorant serfs and destroy their religious faith. The 1709 Penal Act demanded that Catholic priests take the Oath of Abjuration; an impossible requirement as it meant rejecting Catholicism most basic tenet, that Christ is physically present in the Eucharist, and other fundamental principles. Even if they paid lip service to the oath, all priests were required to register in their parish and could not travel beyond. Bishops were barred entirely from registering and any unregistered member of the Catholic clergy had to leave Ireland immediately. Without Bishops, it would be impossible to consecrate new priests; the goal was that Catholicism would die out within a generation.

Priests were hunted like wolves, the reward for the capture of a Bishop was from £50–100 and £10–20 for the capture of an unregistered priest; tremendous sums of money at the time. The priest himself would be charges with high treason punishable by death or transportation into slavery. Those who aided or harbored a priest faced equally severe punishment to themselves and families.

However the Irish will and faith could not be crushed so easily, no matter how powerful the despot. Priests remained in Ireland ministering to the faithful while constantly fearing capture and aided by courageous members of the laity. This was especially true during the feast of Christmas; were the hope and promise of the Holiday was desperately needed to give encouragement to the faithful to preserve during those dark times.

The practice arose for a member of the faithful to leave a candle in the window, which in the dark winter nights of Ireland before electric lighting could be seen at a considerable distance, and to leave the door unlocked as a sign to any priest hiding in the area that they would be welcomed and given shelter in the hopes of a Christmas mass. Needless to say, the candles also drew the attention of English authorities. However, when questioned, people would say the candle was to light the way to Bethlehem for Mary and Joseph and the door unlocked as a sign that while there may be “no room at the Inn”, the Holy Family would be welcomed in this house. The story had the desired effect, English authorities in their arrogance dismissed the candles and unlocked doors as harmless “Papish nonsense”. As a result, the light of the promise of Christ at Christmas was celebrated even in a world dark with oppression.

While the Penal Laws have been repealed, there are still forces today who would seek to destroy our faith and have us renounce our Irish heritage. In memory of our ancestor and to celebrate their courage, let us put a candle in the window at Christmas and let our faith and pride in our heritage shine out throughout the year.