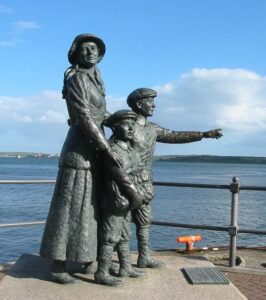 One of the great icons of American History will observe its 125th anniversary on January 1, 2017; Ellis Island. During its period of operation from 1892 till 1954, over 12 million immigrants entered through the immigration station that was to become synonymous with the “Golden Door” and the “American Dream”. It is estimated that today over forty percent of the United States population can trace their ancestry to an immigrant that entered Ellis Island.

On New Year’s Day Morning on the deck of the steamship Nevada stood three adolescents, Annie Moore and her brothers Phillip and Anthony; they were perhaps staring at a recent immigrant from France, the Statue of Liberty. The children had made the twelve day voyage from Cork in the claustrophobic conditions of steerage to be reunited with their parents and older siblings who had traveled on ahead to make a new life in America two years earlier. In addition to the natural apprehension of starting a new life in a strange land the children had no doubt heard that they would be subject to a series of examinations at the immigration station; they would be checked to ensure they were healthy and then interrogated to ensure they were neither a threat or likely to become “a public charge”. A slight malady or a wrong answer could result in them being returned to the Nevada and a trip back to Ireland alone. It therefore must have been with some anxiety that Annie realized that she would be the first to go down the gangplank.

It must have been quite a shock when Annie now found herself caught up in what we would call a PR event surrounding the opening of the new immigration station. The New York Times was there and described Annie as “a little rosy-cheeked Irish girl… fifteen years of age.” (Actually, Annie was closer to seventeen years of age. The children’s ages were all misstated on the manifest, perhaps an attempt by their parents to save money on their passage.) Instead of an anonymous immigration agent, Annie was officially registered by the former private secretary to the secretary of the treasury. The Times continued “When the little voyager had been registered Col. Weber presented her with a ten-dollar gold piece and made a short address of congratulation and welcome. It was the first United States coin she had ever seen and the largest sum of money she ever possessed. She says she will never part with it.” This moment was later commemorated in the song “Isle of Hope, Isle of Tears” popularized by the Irish tenor Ronan Tynan.

Sadly, there would be no fairy tale ending to the life of Annie Moore, her brief moment of notoriety would be a shining moment in a hard and trying life. The statement that Annie would never part with the ten dollar gold piece was likely an invention of a romantic reporter; the coin probably never lasted the day when Annie was reunited with her family who was eking out an existence on her father’s longshoreman salary. She would spend the rest of her life living in a series of tenements near the Fulton Street Fish Market. She would marry the son of a German immigrant who was employed as a bakery clerk. They would have 11 children, but would bury five of them. Annie herself would die at the early age of 47 in 1924; burned out by a life of poverty and struggle.

Annie Moore was initially buried in an unmarked grave in Calvary Cemetery, Queens until it was rediscovered in 2006. Through the efforts of the Irish American community the grave was marked by a Celtic Cross of Irish Blue Limestone. Some cynics questioned the elaborateness of the memorial given the grim reality of Annie’s life. However, in honoring Annie Moore we honor all the other anonymous Irish men and women who came to this country and sacrificed their present for future generations’ tomorrow while at the same time building America. It is reported that many of the current descendants of Annie’s surviving children are successful and respected members of the community.

It is right and proper that we remember the many great Irish American men and women who gained well deserved distinction in government, the military, the arts and sciences. However in remembering Annie Moore we remember the countless other anonymous Irish Americans who loaded our ships as Annie’s father did, built our railroads, fought our fires, patrolled our streets and taught in our schools.

Annie Moore is a reminder that the success of Irish America comes from sweat, sacrifice and tears and not “the luck of the Irish”. It is time we reclaimed the struggle and successes of Irish America from the unmarked graved where it currently lies buried in our schools curricula. She is also a reminder that the “Golden Door” that she once walked through is now unjustly closed to Irish immigrants as it freely swings open to others; a challenge to complete her memorial by seeking a fair and just immigration policy for today’s Annie Moore’s.