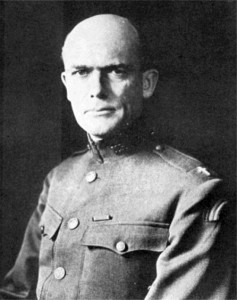 In the summer of 1896, a newly ordained Priest said one of his first masses at St.  Peter’s in Haverstraw, Rockland County.  Though the young Cleric was born in Ontario Canada, he was the grandson of Irish immigrants who had fled the horrors of the Great Hunger.  During the mass, he was assisted by a young Irish American altar boy who was born and raised in Haverstraw.   The young cleric would eventually leave to continue his education, earning a doctorate in philosophy and becoming a teacher at the Seminary of the Archdiocese of New York; the young altar boy would go on to win some renown as a professional prizefighter. The two would meet again; not a chance encounters on a street corner or at a restaurant, but on the bloody battlefields of France in WW I.  Fr. Francis Duffy was now the Chaplain of the Fighting 69th, the last vestige of the famous Irish Brigade of the Civil War and still a predominantly Irish American regiment.  His young Altar Server from that summer two decades earlier was Michael Aloysius Donaldson, now a Sergeant in that same regiment.   Duffy fondly recalled the reunion with his altar sever, now known as “Big Mike” in his memoirs and with some humor described Donaldson reverently giving him a gift of a set of boxing gloves, a gift that the bemused priest was not sure what to do with.

It was often reported that the line for Fr. Duffy’s confessions often exceeded the chow line. Fr. Duffy was not a passive witness to war; he invariably accompanied stretcher parties under fire into “no man’s land” to bring comfort to the wounded and dying. For his courage in ministering to his men under fire, Fr. Duffy would be awarded the Distinguished Service Cross, the Distinguished Service Medal, the Legion d’honneur and Croix de Guerre. Despite his calmness and resolution under fire, even Duffy could not escape the horrors of the Western Front unscathed; witnesses recall that in turning over one young soldier to give the last rites, Duffy broke down into tears; he remembered baptizing him as a baby.

Recognized as a natural leader and the heart and soul of perhaps the hardest fighting regiment of WWI, Duffy was briefly considered to be appointed its commanding officer, which would have been unprecedented as a Chaplain. Fr. Duffy though had other plans. He saw in the heavily Irish Catholic 69th a living example of Irish Catholic patriotism, patriotism which was still far too often questioned back home by the forces of ignorance and prejudice. Duffy used his influence to see that the 69th finished the war and marched back to New York under another shining example of Irish American Patriotism in action: Colonel “Wild Bill” Donovan, who would be awarded the Medal of Honor and lead the OSS, a forerunner of the CIA, in WW II.  Fr. Duffy would conclude the war as the most decorated Chaplain in the history of the U.S. Army for his service and is honored with a statue in Times Square, a block from his post-war parish of Holy Cross. 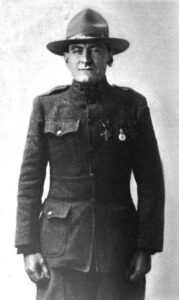 During World War I, the 69th took part in five major engagements and served in the front lines for 164 days.  The regiment would sustain casualties of 644 killed in action and 2,587 wounded (200 of whom would later die of their wounds). One member of the regiment killed in World War I was Daniel Buckley of County Cork who had survived the sinking of the RMS Titanic in 1912.  Sixty members of the 69th earned the Distinguished Service Cross, and three of its members were awarded the Medal of Honor.  Among them was the former altar boy from Haverstraw’s Sargent Michael Donaldson who while his unit was pinned under heavy machine gun fire, ran into “no man’s land” six times to carry back wounded comrades.  After the war, Donaldson returned to Haverstraw where he remained a lifelong resident and is buried in Saint Peters Cemetery. As we begin the commemoration of the centennial of the U.S. participation of WW I, let us remember the heroism of Fr. Duffy, Michael A. Donaldson and the service of the 69th that maintains the legacy of service of the Irish Brigade.

Let us remember all the Irish who have served our nation, especially those who wear the green on their graves in our nation’s service.