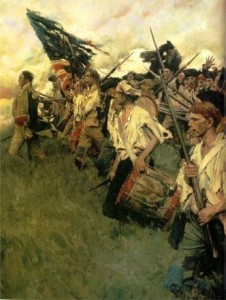 As we enter this July 4th weekend, there will be many programs rightly celebrating the accomplishments of the American Revolution and the Founding Fathers. As Americans have a lot to take pride in. Our revolution was one of the few in history not to be followed by a military dictatorship. The government that it gave rise to, while not perfect, is one of the few that realizes its imperfections and establishes a peaceful process for the governed to transform that government. We as Irish Americans should take particular pride in the role that the Irish played in the Revolution that made this possible.

The Irish connection to the American Revolution can be seen in the history of the Declaration of Independence that we celebrate on the 4th of July. Nine of the 56 singers of the Declaration were Irish Americans. Three were born in Ireland: Matthew Thornton (NH), James Smith (PA) and George Taylor (PA). George Reed was the son of a Dublin born father, his fellow Delaware delegate Thomas McKean was the son of Irish parents. The only non-protestant and only Catholic to sign the Declaration was Charles Carroll (MD), a descendant of immigrants from Kings County (Offaly). Edward Rutledge (SC) was the son of an Irish born father; Thomas Lynch (SC) was the namesake of his grandfather who fled his native Galway after the failed rebellion of 1691. Robert Treat Paine (Mass) was descendant of Robert O’Neill who, under threat of execution by the Crown, changed the family name before emigrating.

However, the Irish connection to the Declaration did not stop with the signing. The final revised draft of Jefferson’s words was prepared by the Secretary of the Continental Congress Charles Thomson of Derry (for National Treasure fans, Timothy Matlack, Thomson’s clerk, prepared the engrossed version of the document some two weeks later that is in the National Archives). The Declaration was then sent for printing, at the risk of being hung for treason, to John Dunlap, formerly of Strabane Tyrone, on the evening of July 4th for distribution to the legislatures of the 13 colonies. On July 8, accompanied by the pealing of the Liberty Bell, the Declaration of Independence was read in public for the first time by Col. John Nixon, of the Philadelphia Committee of Safety at the State House in Philadelphia. Nixon’s father was an immigrant from Wexford and an employer and friend of fellow Wexford man and naval hero of the Revolution John Barry.

The Irish contribution to America’s independence was not limited to the political and philosophical, but also took an active role. The first attack by the Americans on land against the British was the capture of arms and ammunition at Portsmouth, New Hampshire four months before the battle of Lexington by John Sullivan (who would later rise to the rank of Major General), a son of a Limerick native. In February 1776, the Americans scored one of its rare early victories at Moore’s Creek where 1500 Tories surrendered to Colonel (later General) James Moore, a descendant of Roger O’Moore a leader of the 1641 Irish Rebellion. Among the heroes of the key battle of Saratoga was Timothy Murphy, a descendant of Donegal.

In total, some twenty of Washington’s generals were of Irish descent. It is estimated that some twenty five percent of Washington’s Army was Irish. The British historian Froude noted , “Washington’s Irish supporters were the foremost, the most irreconcilable, and the most determined to push the quarrel to the last extremity.” Major General Marquis de Chastellux, who fought with the Americans at Yorktown observed, “On more than one occasion Congress owed their existence and America possibly her preservation to the fidelity and firmness of the Irish.” After the war, Lord Mountjoy stated in the British Parliament, “America was lost through the action of her Irish immigrants.”

It is unfortunate, when today so much effort is made to recognize the contributions of many different heritages to the fight for America’s freedom, that the overwhelming contribution of the Irish is still overlooked. Let us remember, and work to fulfill, the sentiments of George Washington Parke Custis, George Washington’s adopted son, who knew well the service the Irish rendered to his adoptive father:

“Then honored be the old and good services of the sons of Erin in the War of Independence. Let the Shamrock be entwined with the laurels of the Revolution: and truth and justice guiding the pen of history inscribe on the tablets of America’s remembrance, Eternal gratitude to Irishmen.”